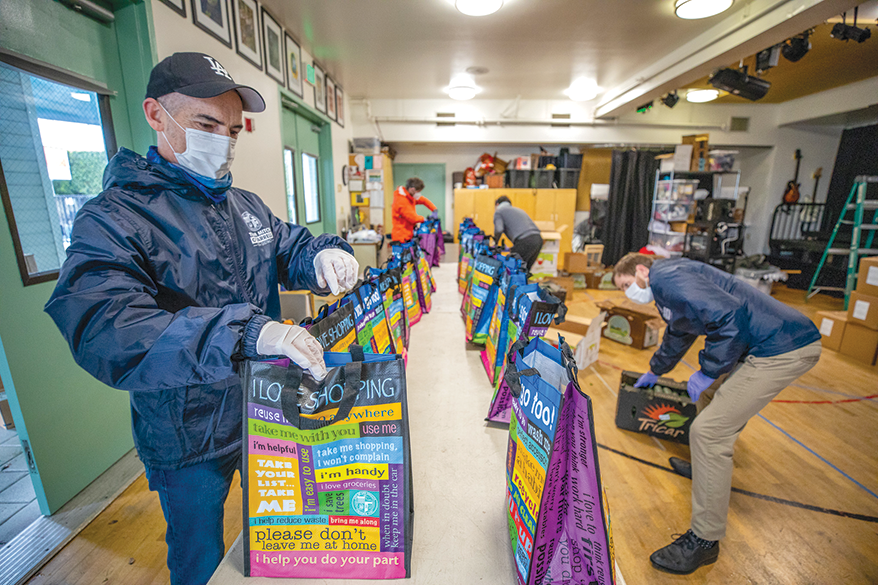 The Central Hollywood Neighborhood Council is extending a lifeline to seniors during the COVID-19 emergency by delivering groceries and essentials to people 65 and older so they do not have to leave their homes.

The CHNC has the help of its membership, community members and other volunteers, many from the Los Angeles Conservation Corps, who assemble food bags and deliver them to seniors in need. The neighborhood council has also enlisted the help of Spencer Hillman, creator of the KinderUS app, which has helped the CHNC coordinate deliveries. The group has been operating at the Hollywood Schoolhouse on McCadden Place, and volunteers come together on Thursdays and Fridays to organize for delivery to Hollywood’s seniors in need. Los Angeles City Councilman Mitch O’Farrell, 13th District, joined volunteers at the Hollywood Schoolhouse on April 9 and helped assemble bags with fresh produce and vegetables. Councilman David Ryu, 4th District, helped the CHNC link with the Los Angeles Regional Food Bank, which has been providing food boxes with shelf-stable canned and boxed goods.

“I want to extend deep gratitude to all who are volunteering to help feed people and save lives,” O’Farrell said. “Thank you, Ferris Wehbe, Louis Abramson and all who helped give wings to this community service project that ensures our most vulnerable neighbors are being taken care of.”

“Seniors are particularly vulnerable right now, not just to this virus, but also to losing the resources they rely on for food and medicine,” Ryu said. “That’s why we all must do all we can to support our seniors. The Central Hollywood Neighborhood Council understands this, and is showing how communities can work together to help our most vulnerable neighbors through this pandemic.”

“When ‘Safer at Home’ began, Hollywood Division’s Community Police Advisory Board saw a need in the local senior community,” said Capt. Steven Lurie, commanding officer of the Hollywood Division. “CPAB is calling all of our local seniors and checking in, and offering grocery or prescription delivery to those who cannot – or should not – leave their homes. I am incredibly proud of the volunteers and sworn officers who are participating.”

Wehbe said the project came together when CHNC leaders considered what could be done to help during the COVID-19 emergency. Abramson, a Hollywood resident who works as an astrophysicist in Pasadena, had a valuable tool already in hand. Chair of the CHNC’s outreach and homelessness committees, Abramson had previously led the council in purchasing voter rolls from the county with information about thousands of residents in the 90028 and 90038 zip codes in Hollywood, including approximately 4,000 seniors. The voter rolls have addresses and phone numbers.

“We got together to figure out what we were going to do and we realized we had this very powerful tool,” Abramson said. “We realized the people who really need this help were seniors, so we focused on them. We just picked up the phone and started calling.”

Abramson said they had to sort through hundreds of phone numbers that were no longer in service or valid, but successfully reached hundreds of people who requested help. They mailed flyers to addresses for those they couldn’t reach by phone.

Abramson had originally envisioned using the voter rolls for disaster preparedness outreach but realized their value during the COVID-19 emergency. They are available for purchase by agencies working in the public sector, neighborhood councils, political candidates and organizations conducting canvassing.

Abramson became aware of the voter rolls through his affiliation with the campaign of former U.S. Rep. Katie Hill (D-Santa Clarita).

CHNC’s operation started by taking grocery orders from seniors and making trips to the store, but the need quickly outpaced the organizations’ ability to handle that type of operation.

They switched the model to assembling donated food and essentials, such as paper towels and toilet paper, in bags and delivering it to the people at their homes, Beck said.

“It’s been a bit overwhelming for a small organization. We are getting a 30% increase every day for sign-ups,” Beck added. “They are all our stakeholders, and we want to help all of them. If we weren’t doing this, they might have to go outside, and they are not supposed to do that.”

Beck, who immigrated to the United States from Russia with her family in 1990, said there is a particular need in Hollywood’s Russian-speaking community. She answers 20 to 30 calls a day from members of that community seeking help, she said.

Wehbe, who operates the Hollywood Schoolhouse with his wife, Debbie, donated the space for operations and is overseeing fundraising.

He said approximately $41,000 of $50,000 identified as the amount needed to cover operations has been raised, but donations are still needed.

O’Farrell’s office contributed $5,000. Wehbe is working with the Los Angeles Cedars Rotary Foundation to collect additional donations, and people are encouraged to visit lacedars.org/donate-la-covid-19-response-team. The CHNC has also created a hotline at (818)738-9935, Wehbe said.

Plans currently call for the operations to run through May 15, when the current “Safer at Home” order expires.

Wehbe said he is taking things day by day, and knows the CHNC is making a difference.

“We have been successful in keeping our seniors indoors and we will continue our work,” Wehbe said. “We are warriors in this fight against the invisible enemy, and we are going to beat it.”