Hollywood Hills residents urged to be prepared if disaster strikes

Months removed from the devastating Woolsey fire, the Los Angeles Fire Department and other local agencies hosted an emergency preparation and evacuation town hall for Hollywood Hills residents on March 16. 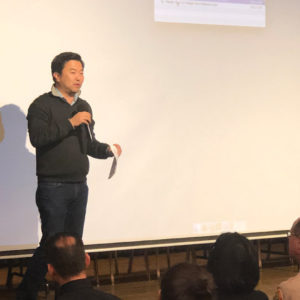 Los Angeles City Councilman David Ryu, 4th District, mentioned a portion of a house that slid down Laurel Canyon during heavy rains as one recent example of why residents need to be prepared. (photo by Luke Harold)

“We need folks to be ready and start thinking ahead,” said Barbara Mariscal, a disaster program manager for the American Red Cross Los Angeles region, addressing a roomful of local residents at the American Legion on North Highland Avenue.

County officials called the Woolsey fire one of the worst wildfires in modern history, and warned that climate change is creating a year-round wildfire risk. Other natural disasters, such as earthquakes, could strike at any time as well.

Many residents have a series of “disaster denials,” including “it won’t happen to me” and “it’s going to be so bad, it doesn’t matter what I do,” Mariscal said. But having the foresight to make sure you have your phone charger, medicines you might require and other necessities will come in handy in a shelter following an evacuation when help from government agencies could be at least a few days away.

“All those basic items are important to hold you down at a shelter for at least three days,” Mariscal said.

During the 1994 Northridge Earthquake, many residents flocked to park areas for safety because the open space provided a sense of security. With Los Angeles overdue for another big earthquake, city officials are expecting residents to make their way to open spaces, including city parks, in the immediate aftermath.

“Our job will be to just bring resources to those areas and help people in those areas,” said Sonya Young Jimenez, emergency management coordinator for the city of Los Angeles.

Excessive rain can also pose a risk. Los Angeles City Councilman David Ryu, 4th District, recalled the heavy rainfall the city was expecting from the El Nino a few years ago. In November 2015, Mayor Eric Garcetti created an El Nino task force to make sure the city was adequately prepared. The heavy rains ended up missing Los Angeles, but the relatively mild downpour did create a few safety hazards.

“Even with a mini El Nino, there were so many mudslides, so much rain,” Ryu said.

A year later, a concrete slab of the foundation of a house in Laurel Canyon slid down a hill and blocked a roadway due to rain.