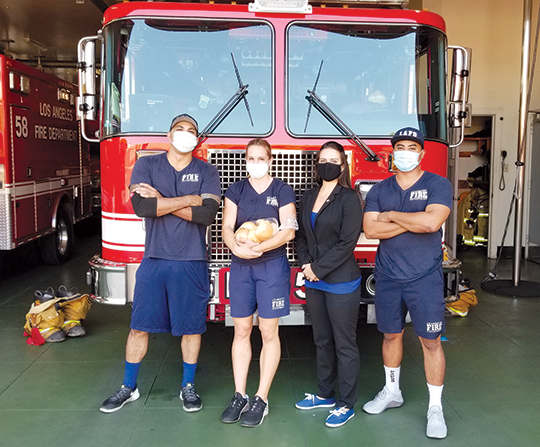 Personnel from LAFD Fire Station 58 enjoyed PowerBurgers and FireBuns as part of the “Firehouse Dinners” program. (photo courtesy of the First-In Fire Foundation)

The First-In Fire Foundation recently partnered with Huntington Meats for PowerBurgers and Diamond Bakery for FireBuns, which were delivered with fresh vegetables to seven Los Angeles Fire Department stations.

The “Firehouse Dinners” program coordinates the delivery of food from merchants at the Original Farmers Market and other sources to local fire stations. Launched this spring, the program started with fire stations in the Miracle Mile and has expanded throughout the city. The most recent deliveries were made to fire stations 37, 43, 58, 61, 71, 83 and 92. Fire Station 58, in the Pico-Robertson area, also houses the LAFD’s Advanced Provider Response Unit serving the Miracle Mile and surrounding communities.

“Emergency preparedness is patriotic,” said Lyn MacEwen Cohen, founder and president of the First-In Fire Foundation. “We are grateful to Councilmember David Ryu, Councilmember Paul Koretz, Television City and private donors who have provided funds for PowerBurger and FireBuns meals.”

“This is exactly the partnership that is needed for success,” added Aram Sahakian, general manager of the Los Angeles Emergency Management Department.