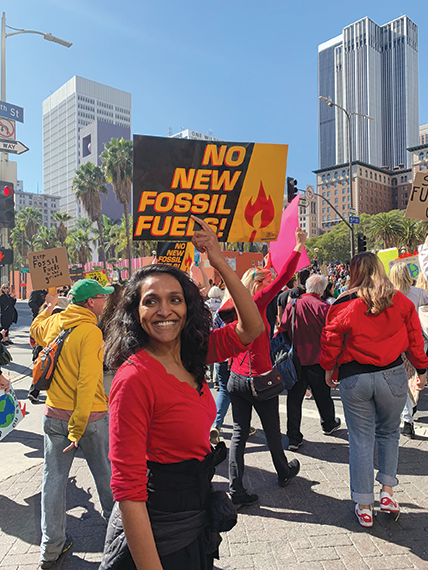 Early vote totals showed Raman had a significant lead over Ryu and by last Friday, the outcome was clear. Ryu acknowledged the election results on Nov. 6 and wished the challenger success. Raman, who will be the first woman to represent the district, said she has since spoken with Ryu and he has offered his support.

Raman and newly elected 10th District Councilman Mark Ridley-Thomas are scheduled to be sworn in on Dec. 14. Raman said during the next four weeks, she will assemble her staff in consultation with members of her campaign team as well as current and former city officials. She cited former Los Angeles City Administrative Officer Miguel Santana as an advisor. Raman formerly worked in his office in 2004, focusing on ways to address homelessness.

“Council members have reached out to me and I have reached out to other council members for their advice during the transition. I am already in communication with David Ryu himself and his office, and they have been incredibly generous in offering their support through the transition, and I’m so grateful for that,” Raman said. “And [I am in contact] with some of the new and old City Hall contacts that I have. I used to work with Miguel Santana, who was the CAO, and with others from that universe who have been in touch with me through the campaign but now are explicitly advising me on putting together a staff and the structure of the office, and getting things in place so that we can hit the ground running.”

Raman said she is in the process of developing specific plans for addressing issues, but knows homelessness and housing will be a major focus. Raman co-founded SELAH, a grassroots organization addressing homelessness in the Silver Lake, Echo Park, Los Feliz, Atwater Village and Hollywood communities, and focused on homelessness when she formerly served on the Silver Lake Neighborhood Council.

“Housing and homelessness issues are what brought me to run for the seat. Housing and homelessness, which includes the rising cost of housing and the rise in homelessness over the past few years, continue to be among the most important issues facing the city and the district,” Raman said. “What I’m doing over the next few weeks is to figure out how I can make some of the ideas that I had, policy ideas that I put together during the campaign, into a reality – what it will take, what kind of discussions I need to be having, what kind of resources I need to be drawing upon to make them a reality.”

Raman added that the COVID-19 pandemic has exacerbated the homelessness problem, and she will be looking at ways to provide relief with the hope of preventing people from losing housing. For people currently experiencing homelessness, she cited more direct outreach in communities with teams better trained in getting people the help they need.

“I will say that the pandemic has changed priorities for everybody. In terms of housing issues, with people who were already facing housing insecurity, those issues have worsened,” Raman added. “Responding to the pandemic and making sure our district and our residents are supported in this moment to stay housed, to stay fed and to stay healthy, and for small businesses to stay open and to be able to weather this moment, has to be a priority for anybody taking office right now, and it certainly is a priority for me.”

Raman said specific plans and partnerships and how they will be implemented will soon be forthcoming. She added that while citywide issues such as homelessness and housing will be a primary focus, community needs are also important, such as better mobility, infrastructure repair and improved quality of life.

“Quality of life issues affect every neighborhood in the district. To be honest, I haven’t heard from a single neighborhood that hasn’t complained about potholes, that hasn’t complained about street quality or sidewalk quality, and my hope is that we can develop a council office that is really responsive to those kinds of quality of life issues and really make sure that we’re proactive about getting things fixed,” Raman said. “That requires developing relationships within City Hall with departments and department staff, and I’m committed to making sure that we build strong relationships that help us resolve those problems quickly. We ran a campaign which talked about bigger ideas, but I don’t think addressing issues at the citywide level or making policy or thinking about policy responses for the city as a whole needs to conflict in any way with neighborhood services. I think we can do both really well.”

Raman also said she has been and plans to continue meeting with residents, neighborhood councils, homeowners groups and community organizations over the coming weeks to get to know them better, listen to concerns and outline her plans. She will be appearing in the Windsor Square Association’s virtual town hall meeting this evening, Nov. 12, at 7 p.m. To view, visit windsorsquare.org.

“We’ve already reached out to neighborhood councils to schedule me to appear and we did that during the campaign,” Raman added. “We reached out proactively to community groups and neighborhood associations of all kinds and tried to get in front of them. I did a lot of door knocking in Windsor Square, so I am excited.”

Until her City Hall office opens, Raman encouraged constituents to contact her office by calling (323)300-4872, or emailing contact@nithyaforthecity.com.

Ryu also wished Raman success, and added that he was proud of his work in City Hall and his staff.

“I congratulate my opponent on her victory,” Ryu said in a statement. “Having won on a wave of reform five years ago, I know how difficult it is to implement change in City Hall. I wish her success in continuing our shared goal of reform in local government and in serving our city.”