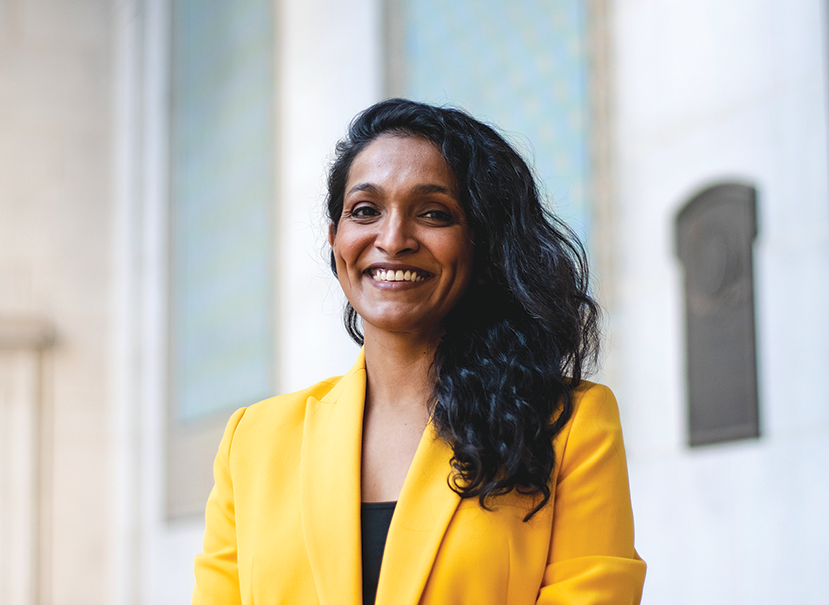 Raman was served with a recall notice on June 9. The recall effort is backed by a group called CD4 for CD4, and the notice was signed by five proponents: Allison B. Cohen, Scott A. Meyers, Michael Malone, William Newby and Susan Collins.

The recall notice claims Raman puts her “personal homeless ideology over constituent safety,” leading to “chaos and lawlessness everywhere” while “wrongly insist[ing] the city can build its way out of the [homelessness] crisis.”

On their website, recallraman.org, and in the recall notice, the organization also criticizes Raman for overseeing an “amateur staff” of “novice employees” who are unable to adequately serve constituents. Raman has also faced criticism for staff turnover, the most recent case of which is Communications Director Jesse Zwick, who announced his departure on June 15, as well as for being aligned with the Democratic Socialists of America, Los Angeles. CD4 for CD4 claims the DSA-LA wants to “destroy and eliminate capitalism” and abolish “all prisons and police.”

Cohen said many people were “surprised” about the level of the relationship between the DSA-LA and Raman.

“The DSA-LA is anti-capitalism, anti-police, anti-prison,” said Cohen, who is also publisher of the Los Feliz Ledger news website. “It’s concerning to some people. It’s really about, ‘Oh my god, they have a seat at your table and you won’t talk to us.’”

Cohen added that Raman and her staff should not act just in the interest of her base, but should reach across to supporters of Raman’s opponent and predecessor, former Councilman David Ryu, to bring the community together.

“We feel an effective leader would have been making inroads and bridges to bring this together, and it’s all about safety, all about security in this district, and preserving some of the most cherished neighborhoods in all of Los Angeles, which Raman seems bent on changing to create housing,” Cohen said.

Cohen and her fellow supporters will have to gather signatures from 15% of the voters in Council District 4 – meaning they’ll need approximately 28,000 signatures – for the recall to go to the voters. They’ll have four months, likely beginning in July, to gather the signatures.

“I love that we are given that much time because there are some people who are concerned about Mrs. Raman and want to give her some more time, and this will give them more time to see before they sign,” Cohen said. “That’s one reason why it’s four months. It gives her more time to perform in her job, and we will watch and see how she responds.”

If the recall supporters meet their signature threshold in the allotted four months, the Los Angeles City Council will schedule the election sometime this winter. Cohen said that if all goes according to plan, the special election will likely be “either April or May of next year.” It could take place close to or simultaneous with another recall election, as a similar effort is underway to recall Councilman Mike Bonin, 11th District.

On Twitter, Bonin called the recall effort “an extravagant waste of taxpayer money” and said the efforts are an attempt to target “progressive officials” and prevent “real solutions to our homelessness crisis.”

Cohen argued that the effort to unseat Raman is not personal, but instead based on policy and effectiveness in office.

“There are lots of us who think Nithya is a lovely person, but we do think that she’s already done some damage in the district that could be very hard to turn back, and that could continue in the months forward, but we appreciate the legal process that’s set before us,” Cohen said.

Raman was not made available for an interview, but in response to the recall, she issued a statement inviting “the organizers of this recall to work with me on making it an even better place to live, work and raise our children.”

“I’m really focused on the broad progressive agenda that got so many voters in the district excited about my campaign: effectively moving people from the streets into housing, protecting tenants, supporting small businesses, fighting climate change and improving our city’s response and engagement on the needs of all of CD4’s constituents,” she said.

Raman added that during her “brief time … in office, I’m proud of the work my team has done.”

“We’ve enabled systematic outreach and connections to housing for dozens of encampments that had long been neglected,” she said. “We’ve introduced and passed legislation to better protect vulnerable tenants from harassment, to support small businesses and to improve our homelessness response. We’ve successfully advocated for a budget that restores funding and full staffing for Rec and Parks and that funds mental health services and alternative crisis response for the district. And we’ve worked with constituents in every single neighborhood of the 4th District to effectively address their concerns.”

Raman supporters highlight her success on those topics as reasons for their continued support.

Louis Abramson, who serves on the Central Hollywood Neighborhood Council and chairs its Homelessness Committee, noted that “it’s only been six months” since Raman’s election.

“From where I sit, all indications are she’s trying to fulfill the promises she made … I think the voters spoke, they spoke by a fair margin, and we should let Councilmember Raman do her job as opposed to trying to recall her right now,” he said.

Hollywood resident Ethan Higuera also noted that Raman had not had a great deal of time to settle into her role as councilwoman.

“I didn’t support David Ryu [when he was first elected in 2015], but working with him after that, we built a relationship,” Higuera said. “Given that we’re only six months in … she’s worked with us, she’s communicating with us, it seems like we’re off to a good start. I don’t have any intention to support a recall effort right now. I think it’s too early.”

Gary Gilbert, who serves on the Greater Wilshire Neighborhood Council and Windsor Square Association, also thinks Raman hasn’t been given enough time to do her job and added that “this recall attempt is wrong, plain and simple.” He also disputed CD4 for CD4’s attempt to criticize Raman for associating with the DSA-LA.

“Trying to paint her as a Communist is Tea Party-level dog-whistle nonsense,” Gilbert said in an email. “To me, not just this recall, but Cohen’s continuing use of her own newspaper to push her personal agenda is unfortunate … Nithya was very clear on her website who she was and what she believed in, and more people voted for her than voted for any [council] candidate in the history of this city, so maybe we should respect the will of the voters and give their candidate a chance to do what she was elected to do?” Gilbert said.

Some in the community, however, claim Raman has had enough time, and six months is long enough to show that the issues that exist now could persist through a full term in office.

Cindy Chvatal-Keane, president of the Hancock Park Homeowners Association, said her organization also does not take political stances, though she noted that the HOA and neighbors have had trouble getting in touch with Raman’s office, which she described as “frustrating.”

“I understand COVID and everything else, but there was a lack of acceptable communication with the office,” Chvatal-Keane said.

Clif Lord, who also serves on the Hancock Park HOA, noted that in his HOA role, he is not taking a stance. As a private citizen, however, he supports the recall. He called Raman “an ideologue who is not a problem solver and who needs to be removed because she represents a clear and present danger” to the city.

“In the process of [focusing on homelessness], she’s neglected people who live in her district, who own homes, who pay taxes and who also need the assistance of the council office,” Lord said. “When you see the ideology overtake the nuts and bolts of governing, it’s concerning.”

Other prominent community members are staying out of the fracas. Steve Kramer, president of the Greater Miracle Mile Chamber of Commerce, said his organization stays out of political issues, but he questioned the use of the “recall mechanism,” which he said is “getting a little overused.”

“It seems people are getting knee-jerk,” Kramer said. “We have an election to elect somebody to serve their term, then you vote them out if you want. To me, it’s beginning to look like a circus, and that’s not a comment, yea or nay. To me, it defeats the purpose of elections. How long has she been in office, six months? People have to be given a chance – absent some horrific kind of conduct, which is not the issue here.”

This article was updated at 9:58 a.m. on June 17 to correct the spelling of Clif Lord’s name.

It doesn’t split the neighborhoods at all. Over 16,000 signatures have already been gathered as of 7/23. She is the most visibly hated local politician save perhaps Mike Bonin, Mayor Garcetti or Lee Baca that I remember in the past few decades…

Makes me wonder what kind of weird echo chamber the writer lives in.