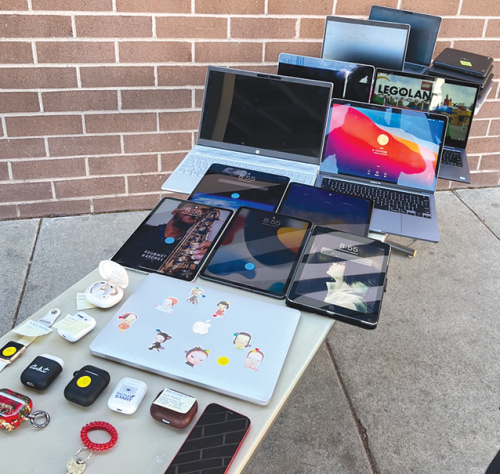 Police recovered laptops, iPads and other property from a hotel room occupied by the alleged auto burglary suspects. (photo courtesy of the LAPD)

Authorities have arrested four suspects from the Bay Area who allegedly committed a series of auto burglaries in communities throughout Los Angeles County from Feb. 24-28, including four in the Los Angeles Police Department’s Wilshire Division.

The suspects were arrested on Feb. 28 at a hotel in Inglewood after police tracked them to the location through vehicle descriptions provided by witnesses. The suspects were identified as Keith Attaway, 28, Timothy Attaway, 29, Donnie Howard, 32, and Anthony Pier, 19. They are from the community of Richmond, located north of Oakland in the eastern part of the Bay Area.

Detective Sam Arnold, of the Wilshire Division, said the suspects specifically came to Los Angeles to commit vehicle burglaries and targeted rental vehicles and cars with out-of-state license plates. The four suspects are affiliated with gangs, and police believe they came to Los Angeles to commit crimes. They were previously unknown to law enforcement authorities in Southern California, Arnold said.

The auto burglaries in the local area occurred in the neighborhoods around Melrose and La Brea avenues. Other break-ins allegedly attributed to the men were reported in the LAPD’s West Los Angeles Division, as well as the cities of Santa Monica and Long Beach, and neighborhoods patrolled by the Los Angeles County Sheriff’s Department in the San Gabriel Valley cities of Walnut and Rowland Heights.

“They were all over the place,” Arnold said. “We have 13 different break-ins, including four tied to this area. We recovered 21 laptops and iPads, high-end purses, cameras and other property. We also recovered three firearms, including a handgun illegally converted to fully automatic fire.”

The suspects were charged with auto burglary and weapons violations and are being held in custody pending court proceedings on March 15.

Arnold said authorities have returned property seized at the hotel to some of the owners but are in the process of identifying others. Some owners live on the East Coast and told police they never thought they would see their belongings again, Arnold added.

“They were really surprised when we called,” he added. “One guy didn’t believe us. We called from an unregistered number and he thought it was a prank.”

Arnold said in 2018, police began seeing a trend of suspects coming to Los Angeles from the Bay Area to commit auto burglaries, but the trend subsided during the pandemic. Now that pandemic-related restrictions have been lifted, police have begun to see an uptick again, he added.

Members of the public are warned to never leave valuables in plain sight inside parked vehicles and are encouraged to update smart phones and computers with tracking software. Arnold said many times people do not know their smart phone’s user ID and password, or have them stored on the devices, making it impossible for police to find them.

“It’s important that they keep that information someplace safe so it can be provided to police,” Arnold added. “We want to make sure people are aware that these crimes are happening. I don’t want them to come here and get victimized.”

The Wilshire Division encourages anyone who believes they may have been a victim of the auto burglaries or is seeking information to email wilshireautos@lapd.online.