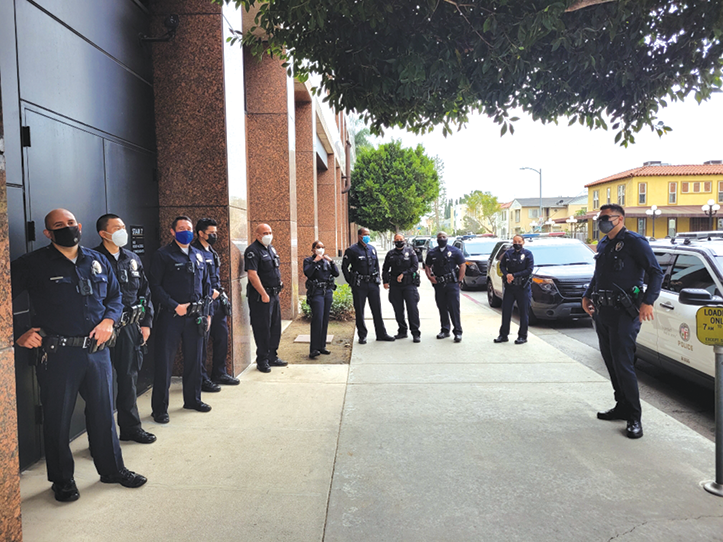 Crime in the Melrose District is decreasing as a result of additional police presence and enforcement during the past two months, authorities and residents said.

Two male suspects arrested on March 11 were likely connected to some of the hold-ups in the area, but police believe a larger crew is likely responsible for other recent street robberies and the investigation continues, said Capt. Shannon Paulson, of the Los Angeles Police Department’s Wilshire Division. The names of the two suspects in custody have not been released. Paulson said one is an adult and the other a juvenile.

“We can conclusively tie them to three of the crimes,” Paulson said. “Everything is still under investigation. We still have unsolved cases, and we believe there are suspects who are still out there.”

The LAPD has addressed crime in the Melrose District with multiple resources including vehicle, bike and foot patrols, as well as the mounted unit and undercover operations. While robberies were still higher division-wide as of March 19, with 20 more in 2021 than during the same year-to-date period last year, aggravated assaults were down 11.8% (nine less than last year) and burglaries were down 11.8% (23 fewer than in 2020).

“Things are definitely trending downward in the right direction, possibly because of the efforts that have been made,” Paulson said. “It’s something we hope to continue.”

Paulson said she also wants to increase community involvement in fighting crime, and plans to host a series of gatherings or walks in different neighborhoods to enable officers and residents to become better acquainted. The first walk was held yesterday evening with the Melrose Action Neighborhood Watch. Peter Nichols, co-founder of the organization, said he is cautiously optimistic the situation is improving.

“It definitely is [improving] in terms of crime along Melrose. It’s been quieter and it’s noticeable, and the statistics show that to be true,” Nichols said. “I am so grateful about that. One of the things is these walks. [Capt. Paulson] is spearheading her plan to have these throughout the division, and I think it is a good idea.”

The walks, socially distanced with people wearing masks, will provide a greater show of unity in neighborhoods, Paulson said. People who want to get involved in helping to organize a walk, or volunteer with the LAPD in other capacities, can contact the Wilshire Division’s Community Relations Office at (213)473-0200, or email wilshirecro@lapd.online.

Other members of the community agreed that police have been more vigilant in recent weeks. Former Los Angeles County Supervisor and local resident Zev Yaroslavsky said he is grateful for the police presence and confident the LAPD will solve the crime problems.

“I don’t know if it’s COVID-related or what the reason is, but I feel this area has had more than its fair share of serious crime. It was a serious trend and people are quite concerned about it,” Yaroslavsky said. “I know the police are on it. They have focused their attention on it and have had task forces on Melrose. You sense a greater police presence in the neighborhoods these days. They are showing their presence and more importantly, they are targeting the people committing these crimes and addressing the problem.”

Nichols said he hopes the enforcement will continue, and with it, reductions in crime.

“They are definitely having an impact,” Nichols added. “You’d have to be living under a rock not to know the heat is on in the Melrose area.”