West Hollywood will now allow businesses located along North Fairfax Avenue to apply for permits to sell beer, wine and alcohol. (illustration courtesy of the city of West Hollywood)

The approval, which passed 4-1 during the March 15 council meeting, reverses a decision of the previous council to prohibit the sale of alcohol in the zone – the east side of Fairfax between Santa Monica and Romaine Street – when the area was rezoned back in 2017.

Councilman John D’Amico, who voted against the motion, said the change strays away from the original intent for the development of the district.

“The goal of this part of the city was to create an atmosphere of a slowed down indoor-outdoor dining atmosphere that is comfortable for neighborhood dining and perhaps destination dining,” he said.

Dennis Nelson, the CEO of Grain Traders, which is located along the stretch, and involved with the development of a coffee shop and dessert bar in the area, spoke during the meeting and said that providing beer and wine would help the businesses’ survival.

“What we’re looking for is not a nightclub,” he said. “It’s the ability to create a small, local spot where people can enjoy a nice early warm dinner and enjoy a beer or a glass of wine. … I do believe that we are an asset to the community.”

The area – known as the R3C-C district – was established in Dec. 2017 with the intent to form a region that incentivized residential development in new mixed use or 100% residential buildings while prohibiting 100% commercial buildings. The council’s rezoning banned alcohol sales with a minor conditional use permit, which were previously allowed. 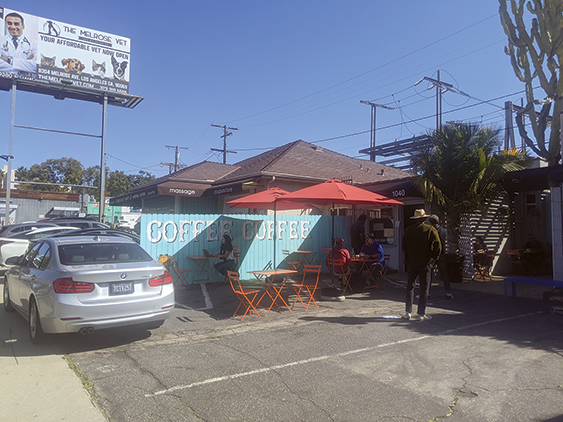 Restaurants along a stretch of North Fairfax Avenue just south of Santa Monica Boulevard are now able to apply for liquor licenses. (photo by Justin Sayers)

Some business owners in the area asked for the change, and the rezoning was brought to the city’s Planning Commission in November as part of a broader zoning change, allowing alcohol sales in closer proximity to residential areas. After initially rejecting the proposal, citing neighborhood concerns, the Planning Commission recommended the approval of minor conditional use permits for alcohol sales solely for the R3C-C district in February.

“The Planning Commission wanted to limit that because they were concerned about projects spanning those districts and their ability to further impact and further be open to the district behind the R3C-C projects,” said Rachel Dimond, the city’s acting planning manager. “Staff believes that you can have conditions of approval that can limit those aspects to the residential behind and on the same site, so as an alternative suggested that be removed.”

The change allows properties to request alcohol service like they were permitted to do so prior to the rezoning, with a conditional use permit, Dimond said. The district allows for restaurants up to 1,200 square feet, art galleries and general retail, but did not allow any associated alcoholic beverage sales with those uses.

The stretch of Fairfax is currently home to 14 parcels – a mixture of parking lots, retail and restaurants, she said. There is only one restaurant currently open along the stretch with the other two in development.

Council members said they took residential concerns into account before deciding on their vote, saying that they were satisfied with the planning commission’s efforts to abate some of those concerns.

“This is Fairfax, so it is a high-traffic area. It’s fairly dense. We’re seeing it be developed as we speak. … I do think the Planning Commission did come to a reasonable solution,” said Councilman John Erickson, who was on the commission before joining the council in December.

“Planning Commission did have a very thorough conversation about neighborhood concerns with respect to coming up with their decision,” councilwoman Sepi Shyne added.

Mayor Lindsey Horvath pointed out that she did not originally support the zoning changes when they were first brought up.

“I still am troubled by the potential impacts on residential neighborhoods with this zoning,” she said. “I think that the Planning Commission did a good job of making sure that the uses are properly vetted, and neighborhoods are aware of what uses might come into their neighborhood.”