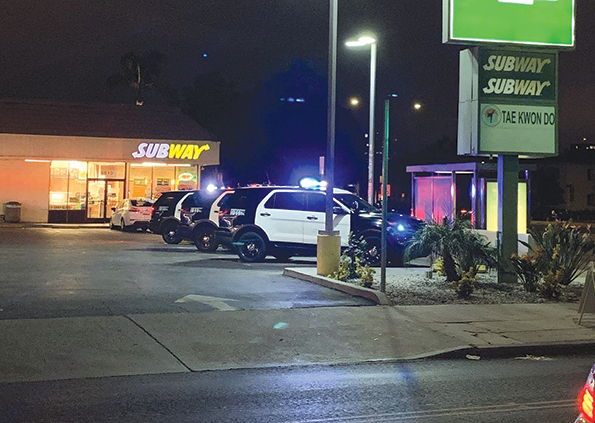 LAPD patrol vehicles were stationed near the intersection of San Vicente and Hauser Boulevards, the site of previous illegal street takeovers. (photo courtesy of the LAPD)

That’s the message from the LAPD’s Wilshire Division, which has been the site of numerous illegal street takeovers during the past months. Paulson said they have been occurring almost weekly on Sundays at different intersections along San Vicente and La Cienega boulevards, as well as other major streets in the Wilshire area. Authorities are fed up, she added.

Street takeovers involve drivers in high-performance cars and large crowds of spectators who show up spontaneously and block traffic at intersections. In the center of the intersections, vehicles perform a stunt known as drifting, with engines revving and tires spinning as the cars rotate in tight circles. Members of the crowd stand dangerously close to the vehicles as they spin on the verge of going out of control.

Paulson said the people involved are “highly organized” on social media and it is believed they travel to predetermined locations at specific times. Officers attempt to monitor social media for clues about when and where a takeover will happen. The incidents frequently occur on Sundays, known in street racing circles as “Sunday Funday.”

Police assembled in large numbers on Dec. 27 at two locations where street takeovers had previously occurred to make sure they were ready if the drivers showed up or took over a nearby intersection. Paulson said the operation was successful, as no takeovers were known to have occurred in the Wilshire area last Sunday. She added that police are taking the situation very seriously and the new approach will be repeated.

“Unfortunately, this is something they do on a regular basis. I believe it’s only a matter of time before a tragedy occurs here,” Paulson said. “This is criminal activity, don’t get me wrong. We’ve seen people injured and we’ve seen people killed in other parts of the city. We have had them throw rocks and bottles at officers when they come to stop this activity. It can be a very dangerous atmosphere.”

Paulson said street takeovers have repeatedly occurred at the intersection of La Cienega Boulevard and Cadillac Avenue, near a large Kaiser Permanente Medical Center. During a street takeover earlier this year, a driver lost control while performing a stunt and careened off the roadway, almost hitting a water main crucial to the hospital’s operations. Paulson said hospital administrators told her it could have forced a major emergency at the medical center had the vehicle struck the pipe and damaged infrastructure.

“It was a very serious situation,” she said. “If that had happened, I was told, it would have forced the hospital’s evacuation. That’s definitely something we don’t want to happen during the current situation with the pandemic.”

The recent operation involved officers amassing near La Cienega Boulevard and Cadillac Avenue, as well as San Vicente and Hauser Boulevards for a majority of the afternoon and evening. Paulson said top LAPD officials sanctioned the operation and specialized police resources were used. To illustrate the impact illegal street takeovers have on public safety, Paulson said those resources were directed away from crime suppression in other parts of the city that addresses homicides and violence. The recent deployment is one of many tools being considered, and police plan to work more closely with the Los Angeles City Attorney’s Office on potential legal action against those organizing and participating in the takeovers.

“We wanted to have a high-visibility and prevent a takeover from the beginning,” Paulson said. “We want to send a very strong message that this won’t be tolerated.”

Steve Afriat mourned by many in local community