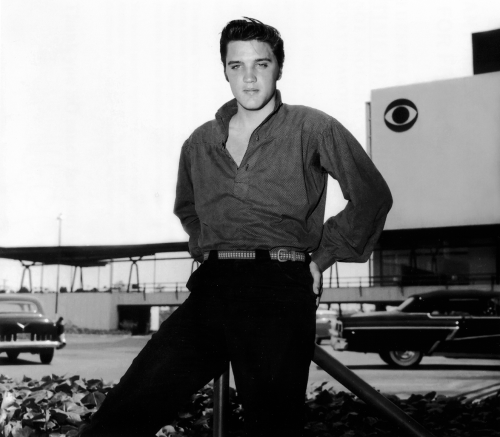 Elvis Presley shook things up at Television City in 1956 when he appeared on “The Ed Sullivan Show.” (photo courtesy of CBS TV City)

Carol Burnett, Sonny and Cher, Art Linkletter. These television icons are just some of the headliners gracing the small screen over the last 70 years.

Television City, at the corner of Beverly Boulevard and Fairfax Avenue, plans to open the curtains soon on a year-long series of events to recognize the milestone anniversary and showcase the venerable studio’s past, present and future. Stay tuned.

“I’m going to refrain from sharing too many details just to build a little bit of suspense, but suffice it to say, there will be a series of events over the next year to showcase the people and the work that goes into making these productions that have become so beloved, that have come out of Television City, and finding ways of getting the community more able to peek behind the curtain, as it were, at what actually happens at Television City,” said Zach Sokoloff, senior vice president with Hackman Capital Partners, owner of Television City. “Because this has been a staple of the Beverly-Fairfax District for seven decades.”

The Television City site has long been a center for entertainment in Los Angeles. Prior to the studio opening in 1952, the site boasted Gilmore Stadium, which hosted auto racing, football games and boxing matches. When New York-based CBS Television was looking for a new place to build a studio in Los Angeles in the late 1940s, the broadcasting company purchased the 25-acre property at Beverly Boulevard and Fairfax Avenue from the A.F. Gilmore Company, owner of the Farmers Market, and began construction on a new production facility in 1949.

The architectural firm Pereira and Luckman was hired to design the new facility, which was envisioned as the world’s first comprehensive television production studio where shows could be produced from start to finish. The idea was to create a “city,” said Michael Klausman, longtime president of Television City.

“I think it’s a tribute to the people who designed it and built it – it was way ahead of its time. It was probably the only facility at that time built for the single purpose of doing television shows. And, obviously, they did something right, because over the years, it has lived up to that design. We’ve made improvements along the way and kept up with technology. But it was designed for a purpose, and obviously, that same purpose we’re using it for today, and people still keep coming back.”

Klausman said the idea was revolutionary at the time, when television was still a fledgling but rapidly expanding medium.

“What was unique about it was most of the studios around town or across the country were just stand alone studios. TV City was designed to be a city,” Klausman added. “So when you come to TV City, you could bring a script, and from that point on, we take over. We’ll build the scenery, we provide the wardrobe for the show, the props, we provide the lighting and grip equipment and everything else. That’s taken care of, so you’re at a one-shop stop when you come here. That’s what it was designed for, which is unique, and it’s still unique in the business.”

Klausman’s first experience with the studio came when he was in second grade, when he appeared as a contestant on “Art Linkletter’s Kids Say the Darndest Things.”

“I guess that kind of paved the path for my career,” he added. “I started in 1971 as a page on ‘All In The Family’ and ‘Maude’ and ‘Sonny and Cher’ and ‘Glen Campbell,’ I was an usher. And from that point on, it’s just been a matter of being in the right place at the right time, working hard. I’ve seen [Television City] develop since 1971.”

“We did a lot of musical things back then, there was a lot of singing and dancing,” Klausman said. “Groups like The Beatles, you know, stuff that you wouldn’t even think about back then but who later became famous. They were just up and coming [at the time]. We had a lot of big talent on the stages.” 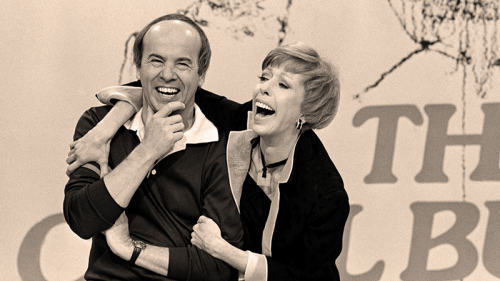 Carol Burnett, with Tim Conway, taped her show at Television City for more than a decade. (photo courtesy of CBS TV City)

Over the years, Television City has produced a laundry list of famous television shows, such as “The Smothers Brothers Comedy Hour,” “The Merv Griffin Show,” “The Dinah Shore Show” and “The Mike Douglas Show” in the early days, and later “All In The Family,” “Sanford and Son,” “The Jeffersons” and “Three’s Company.” Andy Griffith, Dionne Warwick and Dick Van Dyke taped specials at Television City, and Tom Hanks produced his feature “That Thing You Do” at the studio.

Television City is also home to “The Price Is Right,” the longest running game show in television history. Venerable daytime television shows such as “The Young and the Restless” and “The Bold and the Beautiful” are also produced at the studio. In recent years, “American Idol,” “Dancing With the Stars” and “So You Think You Can Dance” have called Television City home, as well as the “Late Late Show With James Corden,” which is currently taped at the studio.

Klausman said one of the most memorable programs ever produced at the studio was “America: A Tribute to Heroes,” a special program that aired on CBS, NBC, ABC and Fox shortly after the Sept. 11, 2001, terrorist attacks. It was organized by actor George Clooney and raised money for the victims and their families.

“He did this tribute to heroes on two stages, 36 and 46, and every star possible was here, every politician was here, the mayor and all the police were here, we even had the Marines,” Klausman said. “I don’t know who else could do it. That one broadcast was live simultaneously on radio, every channel, every cable system … we had everything coming out of this one place. That’s the kind of thing that we are capable of doing. We were the spot for that evening on air.”

Sokoloff said Hackman Capital Partners plans to preserve the studio’s legacy for years to come, and a plan to dramatically expand the studio and build more sound stages is currently making its way through the city planning process. The plan calls for the historic elements of the property including its façade and covered entrance off Beverly Boulevard to be preserved and made more visible to passersby. Klausman and Sokoloff said people make the studio, and that includes audience members who visit for show tapings, as well neighbors and people in the surrounding community. They invite people to visit the studio and experience it for themselves.

“At the end of the day, it really is the people who have come through the studio who have made it what it is,” Sokoloff said. “The talent above the line [and] the below the line crew, the audience members, the visitors and the local residents who count Television City as their neighbor, and who are proud to have the studio and this piece of Hollywood and culture be so vibrant in the Beverly-Fairfax District.”

Television City will recognize its 70th anniversary at a private party on Dec. 8 for staff and employees. Sokoloff added that the studio has been promoting its anniversary on social media, and he encouraged people interested in upcoming public celebrations, or learning more about the studio, to visit televisioncityla.com.

“We maintain an active social media presence that highlights the events that we host onsite, and they can also visit our website, where we promote other opportunities to get involved at the studio, and the broader community outreach and engagement process that we are conducting on an ongoing basis,” Sokoloff added. “As these events become public, we will conduct a more formal publicity campaign launch around each of them. We hope it is something everyone will enjoy.”