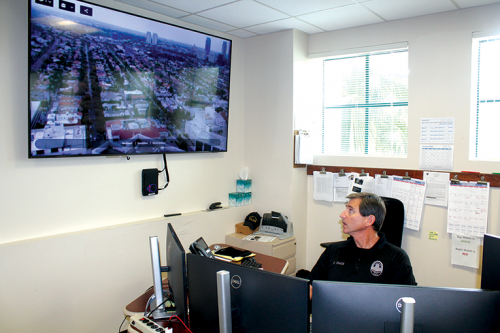 Mark Stainbrook was motivated to interview for the role of Beverly Hills Police Department chief because he wanted the challenge of leading a department on the cutting edge.

He arrived during a turbulent time. Violent crime had risen during the pandemic, with follow-home robberies, smash-and-grab hold-ups and daylight shootings putting many residents on edge. A day after Stainbrook was sworn in on Nov. 30, 2021, philanthropist Jacqueline Avant was murdered in her Trousdale Estates home.

But with the department’s embrace of technology and the support it enjoys from the City Council and residents, Stainbrook saw an opportunity to implement changes that could make the city safer while advancing the profession of policing.

“I thought being able to put those [resources] into use to help the officers and the detectives in the field could really be leveraged in a way that it had never been before,” Stainbrook said. “And I think right now we’re seeing some of the fruition of that.”

A little more than a year after being sworn in, overall crime rates are down in the city, he said, with the biggest decrease recorded among property crimes.

“I don’t have the numbers in front of me … but crime overall is trending much lower,” Stainbrook said.

Going into his second year with the department, Stainbrook is now looking to the future, he said. He wants to develop a three-to-five-year strategic plan focused on using technology to empower officers, improve community relations, grow the department’s ranks and mentor a new generation of leaders.

“I personally believe [BHPD] is positioned to be the police department of the future,” Stainbrook said. “We should be the department other people look at and use as a model.”

The department’s technological push was well underway before Stainbrook took the helm, and he is exploring new advances to refine how the department uses the tools already at its disposal. Rather than purchasing more surveillance cameras, Stainbrook wants to concentrate them in strategic areas, and increase their capabilities by programming them to read license plates.

Improving the department’s use of automated license plate readers is one of his biggest technological priorities. Stainbrook has explored the implementation of software that could alert officers if a car enters the city with an obscured or missing license plate, often a signal of criminal intent, he said.

Stainbrook has also expanded the department’s use of drones. Following a pilot program that was launched in December 2021, the city now flies at least one drone for 10 hours a day, seven days a week, patrolling a permitter that covers almost 80% of the city. The department is currently seeking permission from the Federal Aviation Administration to patrol the entire city, Stainbrook added.

“If you call the police in an emergency, it could take us three minutes to get there. In a non-emergency [it could take] up to 10 minutes. But we try to put the cameras there so within 15 or 30 seconds, we’re already seeing what’s going on,” Stainbrook said.

While the city’s surveillance systems help keep residents and officers safe, Stainbrook is mindful that some might be worried about the possibility of police overreach.

“I’m a private citizen, too, and I want my own privacy respected,” he said. 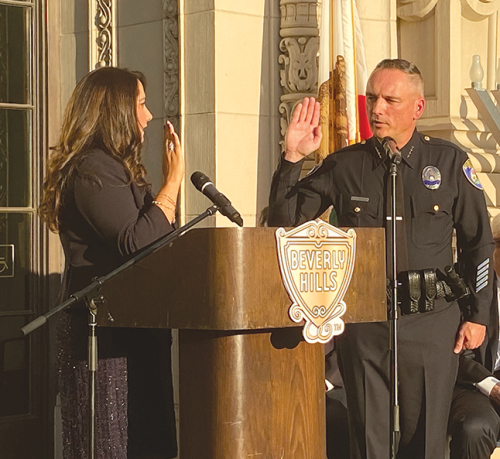 BHPD Chief Mark Stainbrook was sworn in on Nov. 30, 2021, on the steps of Beverly Hills City Hall. (photo by Edwin Folven)

He said that the city’s surveillance methods comply with all state, federal and local laws, and added that the cameras are all placed in public facing areas like parks, roads and sidewalks where people would have no reasonable expectation of privacy.

The drones do not zoom into public spaces unless the department receives a call dictating that it is necessary, and its flights are tracked on a map and monitored by a watch commander who sits beside the drone pilot at all times, Stainbrook said.

“[Officers] received training on our privacy policies and all the laws regarding privacy. The focus is strictly on criminal activity or quality of life issues,” Stainbrook said.

After one year on the job, however, it is not the technological advances that make Stainbrook most proud. It is the work done by the officers who serve with him, he said.

“They know that citizens here have a huge amount of support for the police. They recognize that, and it seems to me that they always want to live up to those high expectations,” Stainbrook said. “I’m just very proud of the work that they’ve done.”

He listed some of the most prominent cases that BHPD officers helped solve during his first year, including the murder of Avant, a case that he said made him “sick to his stomach.”

Parolee Aariel Maynor was arrested in connection with the murder after burglarizing another residence in the Hollywood Hills on Dec. 1. He pleaded guilty on March 3 to one count each of first-degree murder, attempted murder and possession of a firearm by a felon, as well as two counts of first-degree residential burglary with a person present. He was sentenced on April 19 to 190 years to life in state prison.

Stainbrook spoke with Avant’s family members after the murder, and said they were some of the kindest people he had ever met. The murder was reprehensible, he added.

“I’m glad we could bring the person to justice and have some closure for the family,” Stainbrook said.

The BHPD’s response to the murder exemplifies the quality of officers that comprise the BHPD, and Stainbrook is intent on growing the ranks even more, he said. Last year, Stainbrook set a goal of employing 150 officers, and is approximately 15 shy of meeting that goal, he said.

While the pool of applicants has shrunk considerably over the last 10 years, Stainbrook said that with a new marketing program and new processes to expedite recruitment, he is soon looking to hit the 150 mark.

As police chief, Stainbrook considers himself a mentor to the next generation of BHPD officers, and he hopes that the recruits he hires in the next few years will one day lead the department when it is time for him to step down, he said.

“I think we have such great people here that I’m very confident that we’ll develop a new group of leaders coming through the department that will take Beverly Hills way into the future,” Stainbrook said. “I want to position the department so that the chief in 2050 can say, we still are the department of the future.”