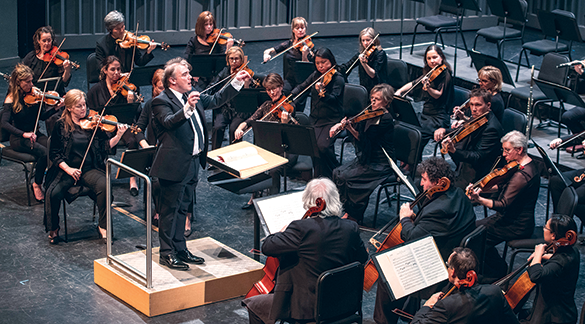 Los Angeles Chamber Orchestra is opening its virtual doors to the entire community, inviting the public to stream its free, digital 2021 gala, “Meet the Moment,” which celebrates the orchestra’s virtuosic musicians, on Sunday, April 18, at 6 p.m.

Donations are accepted and proceeds from the virtual party supports LACO’s musicians. They also help ensure the future of LACO’s education programs, including Meet the Music. Martín and LACO Executive Director Ben Cadwallader host the gala, which is co-chaired by Jennifer Diener and Anne-Marie Spataru. It will be broadcast at laco.org/gala and LACO’s YouTube channel.

“LACO’s home stage is all of Los Angeles since the orchestra typically performs in venues across the southland, and that’s reflected in ‘Meet the Moment,’” Diener and Spataru said. “We are delighted to welcome virtual audience members from L.A. and around the globe to celebrate LACO’s astonishing artistry.”

“This gala has two main goals: celebrating and supporting the musicians in our orchestra, and ensuring the future of LACO’s vital education programs. We also honor the trailblazing philanthropy of Capital Group. Over the last two decades, Capital Group executives have been generous LACO board members and donors, and we are grateful for their sustained support,” Cadwallader added.

Gala highlights include a special broadcast of selections from LACO’s 2019 performance of Ravel’s “Le Tombeau de Couperin” and the finale of Prokofiev’s beloved “Classical Symphony,” plus an array of compelling musical performances from LACO’s 2020 SummerFest and the 2020/21 season of Close Quarters.

Additionally, the celebration includes a virtual auction, open to the public. Registered bidders will enjoy an array of items that include a five-day stay in Reykjavik, Iceland (redeemable within two years) and a stay at the InterContinental Los Angeles in downtown L.A., as well as specially curated collectors-edition items from Marvel, accessories from Armani, a photograph of Kobe Bryant by former Los Angeles Lakers photographer Atiba Jefferson and more. The auction opened on April 14 and closes after the celebration on April 18.