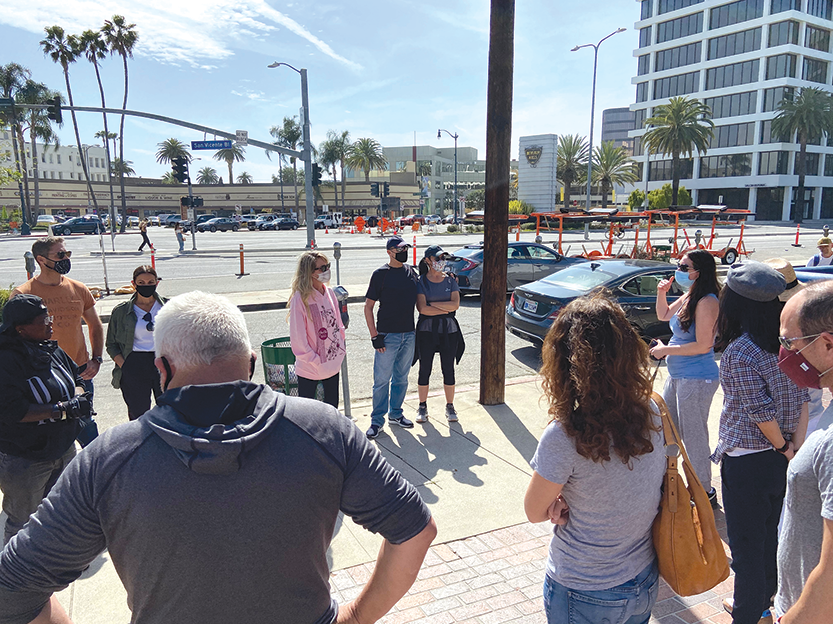 Residents of Beverly Grove gathered on April 10 near San Vicente and Wilshire boulevards to discuss ways to make the community safer. (photo courtesy of Molly Basler)

Tents were cleared earlier this week from the corner on San Vicente Boulevard and Orange Street after the city found temporary housing for people at an encampment located there for months.

The encampment, which some said was a center of criminal activity, became a heightened concern after the murder of a 31-year-old Maryland Drive resident on March 29. The victim was stabbed to death during an alleged burglary committed by a man who police said was a transient and had been staying in a vehicle in the neighborhood. The suspect died by suicide shortly after the homicide.

Police have not connected the suspect to the encampment formerly at San Vicente Boulevard and Orange Street. Regardless, the encampment and the murder had been a concern in the neighborhood, and the removal of tents was encouraging, residents said.

“I feel like the neighborhood can finally take a breath now,” said a resident near the site who asked to only be identified as Peter. “They found them housing, and it was a peaceful transfer. A fence was put up. I think they did it the right way. They came out and provided services and even brought a big truck so people could store their belongings. I think things are moving in the right direction.”

Greg Martayan, director of public safety for Los Angeles City Councilman Paul Koretz, 5th District, confirmed on April 13 that housing was identified for the approximately 10 people who were still living at the encampment at the beginning of the week, and the site will be monitored so anyone new who arrives can also receive help. As of April 14, fencing had been installed around the sidewalk where the encampment was once located. The city is also helping to expedite a demolition permit for an abandoned building next to the former encampment that some residents said attracted unhoused people to the area in the first place. A fire on April 2 damaged the building, which is now also fenced and boarded. Plans call for it to be razed by next month.

Koretz said he is happy solutions were found for housing people at the site and hopes concerns will subside in the neighborhood. He said the housing provided was a combination of Project Roomkey accommodations in hotels and motels, as well as residential buildings. 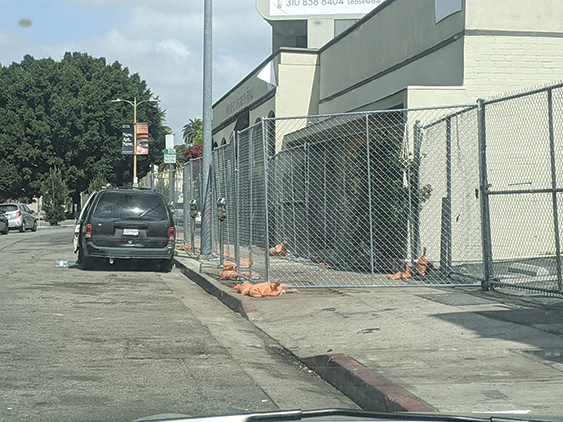 Tents have been removed and fencing installed at the site of a former encampment at San Vicente Boulevard and Orange Street. (photo by Justin Sayers)

“This is a win-win, and it took a lot of outreach,” Koretz said. “We were able to clear out that area, and we were able to get people into housing. It wasn’t easy and took a considerable amount of resources, but I think it is a step in the right direction.”

Los Angeles Police Department Capt. Shannon Paulson said law enforcement was part of the overall effort to address the issues and officers will continue to monitor the area to maintain public safety. Peter, the resident near the former encampment, said he frequently saw LAPD officers at the site.

Although the removal of the tents has prompted optimism, some residents said the recent homicide is a result of larger issues involving homelessness and crime, and they blamed the city for not addressing the issue quickly enough.

“This is a humanitarian crisis, and it’s happening all over the city,” said Beverly Grove resident Molly Basler. “People are living on the streets and people are dying on the streets, and we’ve got to change things. It’s an outrage.”

Basler, a candidate for Los Angeles City Council’s 5th District in 2022, gathered with a dozen residents in the parking lot of a sporting goods store near the former encampment on April 10 in a showing of neighborhood solidarity. She said she understands that there are difficulties in addressing homelessness and sympathizes with those who are unhoused, but she said the city and Koretz have not done enough to support residents.

“We did this to call on public officials to do more on homelessness,” Basler said. “Everybody is fed up.”

Koretz added that the city is committed to addressing homelessness.

“It will take a fair amount of time to address the broader issue. We have 40,000-plus people living on the streets of Los Angeles, but myself and my office are committed to working on and solving the issue.”