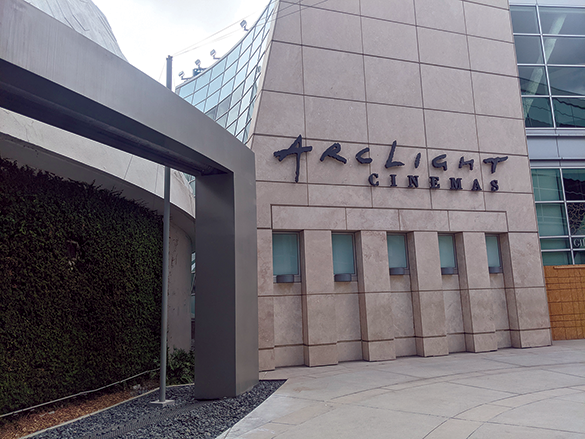 Pacific Theatres and ArcLight Cinemas announced on Monday, April 12, that they will not be reopening any of their locations. (photo by Justin Sayers)

At a midnight screening of “Zombieland,” Oct. 2, 2009, the audience didn’t seem unique, hardly the level of energy now famous in a viral reaction video to the “Avengers: Endgame” climax. But when a trailer for a “Nightmare on Elm Street” remake interrupted that green glow between entries, four words unified us all in disapproval: “From producer Michael Bay.” Boos came from everywhere.

Just over three months prior, Bay earned the ire of many diehard cinephiles with the juvenile “Transformers: Revenge of the Fallen.” This crowd hadn’t forgotten.

I miss those midnight movies. Standing in line predicting what will transpire, beach balls flying around while folks wait, kindred souls sharing a moment in a darkened room. Cult classics like “Rocky Horror Picture Show” at the Nuart any given Saturday keep the midnight magic alive, but that 12 a.m. premiere has slowly drifted away.

Eventually, Thursday scheduling expanded to include showtimes at 7 or 8 p.m. The midnight crew fragmented, that singular experience scattered across multiple screenings. Something special withered away.

Moviegoing is lesser for it. And on Monday, moviegoing changed, once more, for the worst.

The pandemic has been especially hard for theaters, almost leading to AMC’s bankruptcy. Sadly, no 11th-hour discovery of funds saved the ArcLight and Pacific Theaters from closing permanently. ArcLight never even turned 20, but those theaters developed quite a reputation. And of course Pacific dates back to the 1940s. (FYI, the Cinerama Dome at the Hollywood ArcLight is a historic monument, so don’t fear that it’ll become high-end housing.)

I wish I could offer hope, the necessary invisible hand will make room for something new, better even. Not today. People lost their jobs. A city landmark is now in limbo. Perhaps a savior will acquire the L.A. location, but that doesn’t change the underlying tragedy here. Fans of revival-house cinema know this story well, especially patrons of the New Beverly Cinema, only around now (or at least pre-COVID) thanks to Quentin Tarantino’s purchase of the building.

What we love is fleeting. And some things change in a way that never returns. ArcLight theaters never encapsulated my preference, namely choosing seats and limiting trailers before the feature. But I applaud ArcLight for its respect for film history, both through specialty displays in the lobby and more formal engagement. Not everyone appreciates the loud, bombastic crowd bellowing, cheering, jumping. No judgment here.

ArcLight afforded a more intimate setting, and several flavors of popcorn. More so, the Hollywood location served as one of the few trusted venues to release all those films other theaters ignored the farther you got from L.A. 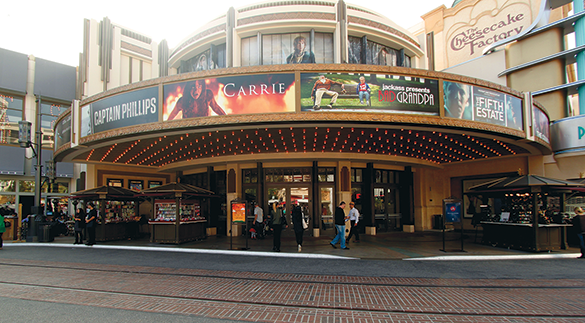 The Pacific Theatres location at The Grove will close as part of an announcement from the company that they’re not reopening. (photo courtesy of Wikimedia commons)

While every other theater locked in three to four showings of “Frozen” or a “Hobbit” flick, ArcLight Hollywood made room for the likes of “Saving Mr. Banks” or “Whiplash,” to name a couple I enjoyed late at night alone in service of viewing all necessary films for awards season.

Moviegoing comes in all forms, and I truly feel for those who loved to experience the movies in this way. It’s a loss, one of many I’m sure will keep coming in the next few years. The only comfort here is the sting’s familiarity, solidarity in loss.

A few years ago, one of my students judged me for owning around 500 DVDs and Blu-rays. “Why don’t you just watch them online?” she asked me. Certainly digital media presents us with thousands of options, but they aren’t always the kind that last. Dig into any genre category on Amazon Prime and you’ll see how quickly the options devolve. Not everything moves online.

Physical media and brick-and-mortar theaters still matter. The ArcLight embraced all forms of cinema – major blockbusters and modest indies. This closure will only make indie films or mid-budget dramas harder to access, forcing them to skip big-screen exhibition entirely.

This has already caused challenges, like Steven Spielberg’s position that such films shouldn’t qualify for Academy Awards. Like my love for midnight movies, things are evolving – not for the better. To say it’s all “just different” misses what will go away.

This doesn’t merely affect the films you didn’t know exist. The ripples will spread even to those precious blockbusters that keep the lights on during the summer and major holidays. Without chains like ArcLight and Pacific, smaller films have fewer willing distribution options. And all the directors who start small before directing the next summer actioner will find an already frustrating glass ceiling even harder to crack.

The ArcLight-Pacific news is shocking, but it won’t be the only casualty. This loss is unfortunately too familiar, one of many paper cuts over the same wound. Mourn for those who lost a part of their L.A. identity, and find hope, if you can, in the memories of this medium we all adore and hope will survive with its soul partially intact.