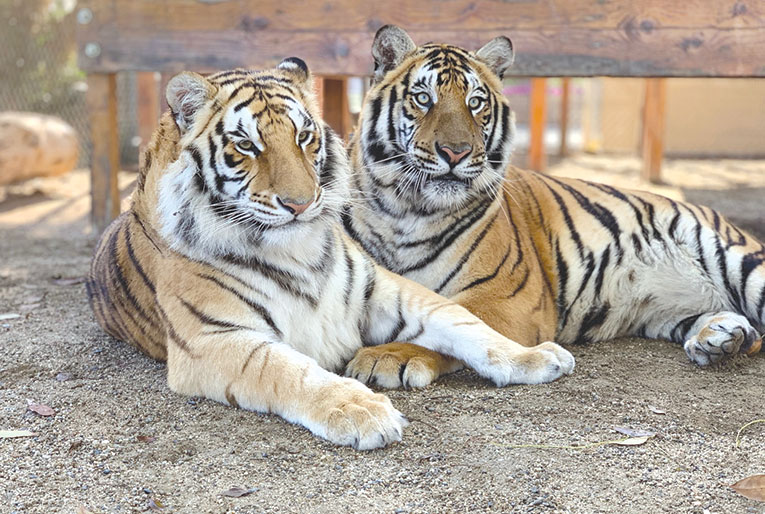 The tiger that was at the center of the case, Neil (shown at left), currently lives at an animal facility with its companion, Karma. (photo courtesy of Los Angeles City Attorney Mike Feuer’s office)

Los Angeles City Attorney Mike Feuer recently announced that his office has secured a conviction of Nicholas Perkins, 33, over allegations that Perkins illegally possessed and mistreated a baby tiger cub at his home and possessed anabolic steroids.

The Bengal tiger cub, now named Neil, was identified by the California Department of Fish and Wildlife through social media posts, including a YouTube video with online personality Logan Paul.

Perkins pleaded no contest to one count of unlawful possession of a restricted wild live animal. He agreed to serve 36 months of summary probation; pay a $1,000 fine plus penalties and assessments, totaling approximately $3,900; pay $2,000 to the DFW Preservation Fund; pay all veterinary bills associated with the case, which total approximately $52,000; attend 16 hours of animal cruelty classes; and cooperate in any subsequent investigation of the breeder and seller of the tiger.

“We should never allow any animal to be exploited,” Feuer said. “The defendant’s conduct here is illegal, and flaunting this treatment of an exotic, endangered baby tiger on social media sent a horrible message that behavior like this is OK. It isn’t. My office remains committed to protecting the welfare of all animals and holding accountable those who put them in jeopardy.”

The Special Operations Unit of the California Department of Fish and Wildlife assisted with the case.

“California wildlife officers are doing everything possible to stop the trafficking of wildlife in California and all over the world,” said David Bess, deputy director and chief of the law enforcement division of the California Department of Fish and Wildlife. “Addressing the crimes associated with possession and mistreatment of this tiger is a measurable gain in that effort.”

In December 2018, Feuer filed a case against Perkins for the alleged illegal possession and mistreatment of the baby tiger cub at Perkins’ home. A search warrant to seize the cub was executed on Perkins’ home on Nov. 9, 2017, and the animal was taken into custody. During the search, there was extensive evidence of the animal’s poor living conditions and the presence of anabolic steroids.

The tiger currently lives at America’s Teaching Zoo at Moorpark College. He lives with his companion, Karma, who is two weeks younger. They have been together since the age of six months, which experts report is ideal for a lifelong tiger friendship.

The next court date to discuss Perkins’ progress will be held on April 22.