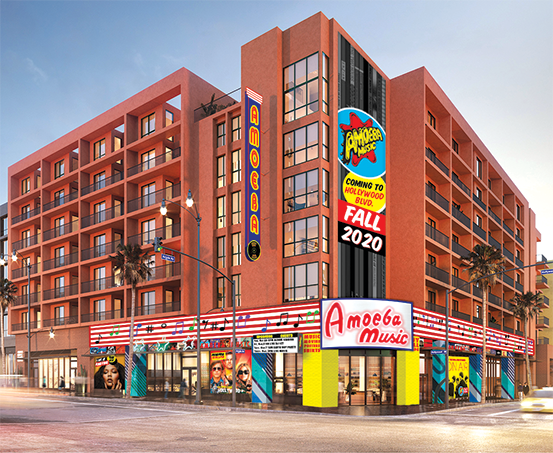 Famed record store Amoeba Music has found a new home in Hollywood, but it’s not going anywhere for at least a few months.

The business is moving to the El Centro complex, located at 6200 Hollywood Blvd., sometime after Labor Day, according to a video announcement that featured Grammy-winning musician Tyler, the Creator. Amoeba has been located at 6400 Sunset Blvd. since 2001 and will continue to operate there until it relocates, according to Amoeba’s website.

In June, a 26-story mixed use building was approved for the Sunset Boulevard site, which Amoeba sold in 2015 but continues to lease. The approved 232,000-square-foot building is expected to include up to 200 residential units, of which at least 10 will be for very low-income households, and 7,000 square feet of commercial space on the ground floor.

Jim Henderson, co-owner of Amoeba Music, said the Amoeba team wanted the new location to be on the eastern side of the Hollywood Walk of Fame, which offers “a more familiar energy and atmosphere for us and our customers.” The El Centro complex was selected from a short list of four or five potential sites, Henderson added.

“We wanted to be in the neighborhood. Being in the heart and soul of Hollywood is important to us and our customers. It’s hard to find a lot of large available spaces in that area, so the decision was made for us to a certain extent,” Henderson said.

Once the move is complete – as the process moves forward, the actual move might take place closer to the end of the year than Labor Day, Henderson said – Amoeba will be in a slightly smaller location that offers more natural light and open views of Hollywood Boulevard. The record store will also be more accessible to public transit, including a subway stop at Hollywood and Vine, and pedestrian traffic, Henderson said.

“Being that close to the Pantages and the Fonda Theatre and a very like-minded customer base, we feel pretty good about that,” Henderson said.

Kristopher Larson, president and CEO of the Hollywood Property Owners Alliance, which oversees the Hollywood Business Improvement District that includes both Amoeba’s current and future locations, said Amoeba’s move to the El Centro will allow the heavy pedestrian traffic of Hollywood Boulevard – including people who will be seeing a show at the Pantages or those visiting the Funko store across the street – to also visit the record store.

“You benefit from attracting the individuals that are attracted to your neighbors,” Larson said.

Larson added that the new Amoeba location helps balance the “barbell” of the Hollywood Walk of Fame, which is anchored on the west side by the Hollywood and Highland complex.

“This rounds out the attraction on the other end, which has the Hollywood and Vine station. We view this as a plus-plus,” Larson said.

“Los Angeles is a creative capital, a place filled with dreamers who move and inspire us every day,” Garcetti said. “Amoeba Music reflects the best of this creative spirit, and Angelenos are fortunate this beloved cultural treasure has found a new home guaranteeing its place in our city for years to come.”

Los Angeles City Councilman Mitch O’Farrell, 13th District, who recently revealed a proposal to renovate and revitalize much of Hollywood Boulevard and the Walk of Fame as part of his HEART of Hollywood initiative, was similarly effusive in the record store’s statement.

“I think I speak for most Angelenos when I say that we are thrilled that our beloved Amoeba Music is staying in Hollywood … and are even more delighted to welcome the store to the Walk of Fame, which we are actively trying to enhance with my HEART of Hollywood initiative,” O’Farrell said.

Alongside its core business, Amoeba was reportedly considering adding a cannabis business to its Hollywood location – Amoeba’s Berkeley location features a dispensary called Hi Fidelity – but Henderson said “that’s not something we’re focused on at the moment.”

“It might be something in the future, but we haven’t taken any steps in that direction yet,” Henderson said.

While the new location is not as amenable to the large murals and billboards of album covers that decorate the current location, Larson said the Hollywood BID is “looking forward to see what they can do in the space.”

“Every canvas is different. What they have at the current location, obviously, there’s nothing else like it, but the opportunity to be able to decorate a new canvas is something we look forward to learning more about,” Larson said.

Henderson said Amoeba plans to “bring a lot of personality to the space and not necessarily try to replicate something.”

“There’s plenty to be nostalgic about at the amazing shop that we’ve been able to enjoy for the past 20 years, but there will be time for that as we get closer to closing the doors. Ultimately, it’s a good move for us to have an opportunity to reinvent ourselves as a record store for the next 20 years and beyond,” Henderson said.