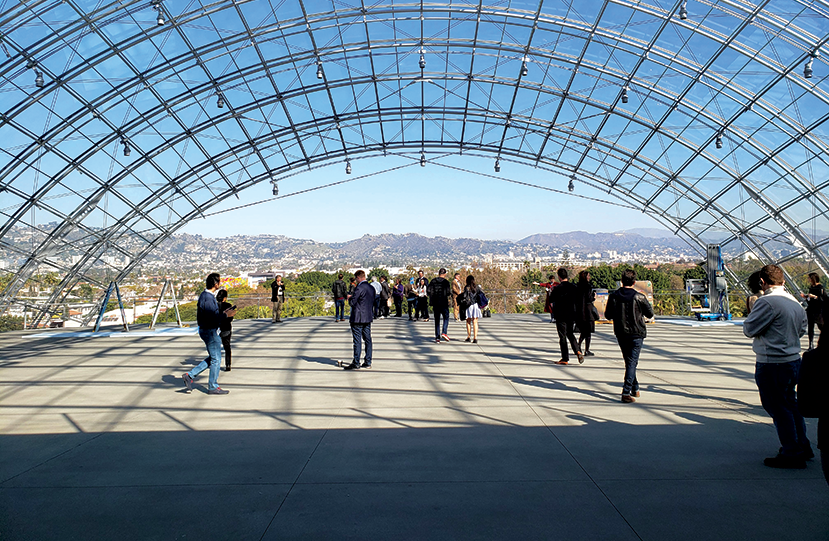 The Dolby Family Terrace atop the Academy Museum’s sphere offers views of the Hollywood sign. (photo by Cameron Kiszla)

During the Academy Awards on Feb. 9, actor Tom Hanks took the stage. However, instead of announcing a win for a director or cinematographer, the two-time Oscar winner had good news for the Miracle Mile and film lovers around the world: The Academy Museum of Motion Pictures will officially open its doors on Dec. 14.

“We’re all very proud of what has been accomplished so far in the landmark that is taking shape at Fairfax and Wilshire … It’s going to be a very big deal, and we’ll see you there,” Hanks said.

When the museum finally opens at 6067 Wilshire Blvd., guests will be exposed to approximately 50,000 square feet of gallery space containing memorabilia from many highly decorated and beloved films.

The second and third floors will house the museum’s permanent exhibits, including items such as the ruby slippers from “The Wizard of Oz.” An exhibit on the iconic film was once planned to be in the lobby, but it will now be part of a special gallery that focuses on each person’s role in working on a movie and how those parts come together to create a film.

“As we’ve been refining the narrative of the exhibition, we really felt it worked better in the core exhibition,” said Dara Jaffe, an assistant curator with the museum.

The museum will also include temporary exhibitions, starting with a retrospective of Hayao Miyazaki, the Japanese filmmaker best known for animated movies like “Spirited Away” and “My Neighbor Totoro.” The Miyazaki exhibit will include production materials, projections of portions of his films and “spatial installations,” said Jessica Niebel, the museum’s exhibitions curator.

“We’re hoping to create magical experiences for all of our visitors,” Niebel added.

The second temporary exhibit is “Regeneration: Black Cinema 1900-1970,” which will focus on the successes and struggles of African Americans in the film industry.

“We want to tell stories from many points of view,” said Bill Kramer, the museum’s director. 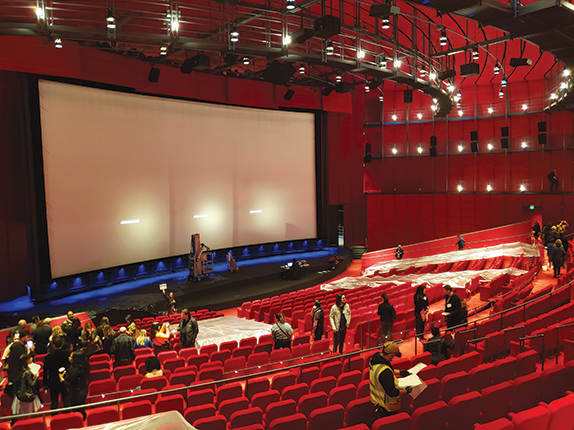 The 1,000-seat David Geffen Theater can show many types of films, including those on nitrate. (photo by Cameron Kiszla)

The Academy Museum will also include the Shirley Temple Education Studio for a hands-on experience and two movie theaters.

The smaller 288-seat Ted Mann Theater will include showings such as matinees of children’s movies and foreign films, including some made by Miyazaki. The 1,000-seat David Geffen Theater, which is inside the large sphere-shaped structure that was constructed and attached to the historic May Company building, now known as the Saban Building in honor of museum benefactors Haim and Cheryl Saban, will host daily screenings, special events, openings and previews. In addition to the multiple film and digital formats the Mann Theater can accommodate, the Geffen Theater can show films produced on nitrate, a combustible format Quentin Tarantino fans might remember from its role in “Inglourious Basterds.”

Above the Geffen Theater is the Dolby Family Terrace, which offers views of the Hollywood Hills and the Hollywood sign. Together with the fifth-floor area in the Saban Building across the Barbra Streisand Bridge, the Academy Museum plans to serve as an event space as well as a cultural institution.

“The idea is that this is the space for the public to gather,” said Katherine DeShaw, the museum’s deputy director of advancement and external relations.