Volunteers collaborated in sorting over 25,000 items of clothing by gender and size, to be donated to several community organizations. The event saw its biggest turnout, according to Big Sunday founder and executive director David Levinson, with over 1,000 people from hundreds of different community groups. 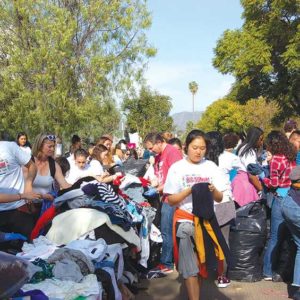 More than 1,000 volunteers sorted clothing to be donated by Big Sunday during an MLK Day of Service event on Monday. (photo by Crystal Duan)

This year, the nonprofit’s drive had children who made signs stating their dreams, displayed in the driveway of the building, as well as the organization’s “Something in Common” photo project that celebrates the community’s differences and similarities.

Susie Pretsky, a parent volunteer whose daughter attends Pressman Academy with Temple Beth Am, was with a group of 60 volunteers including adults and children.

It was Pretsky’s first time volunteering, but she enjoyed the experience.

“Everybody felt so good coming together to do something for the community, and we’re grateful for the opportunity to meet with so many other community groups too,” she said.

Greg Jackson, a marketing sourcing specialist at Disney, was also a first-time volunteer.

“It’s so many different organizations all doing the same thing,” he said while sorting small sized shirts into a bag. “It really is remarkable.”

The organization, which connects people with opportunities to volunteer in the community, is now in its 20th year and frequently hosts events for participants of all ages, races, religions backgrounds and ethnicities. Recognized nationally, Big Sunday also holds the country’s biggest community service festival – A Month of Big Sundays, (MOBS), the signature event of the organization that happens in May.  MOBS (formerly Big Sunday Weekend), started in Los Angeles and is now in several states and internationally in Adelaide, Australia.

Motorcyclist killed in crash near Third and Highland