In his second term as chair of the Metro board, Garcetti will focus on a three-pronged agenda: “Build, Ride, and Plan.” “Build” refers to moving forward with new transportation projects quickly and efficiently, and accelerating the plan to use Measure M funding to ease traffic. “Ride” refers to taking aggressive steps to improve the Metro rider experience, and “Plan” focuses on creating jobs and building communities around the growing transit network. 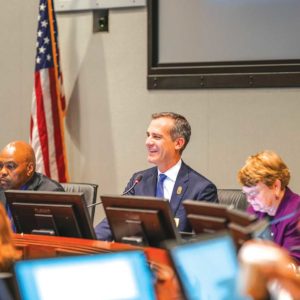 Mayor Eric Garcetti will serve as chairman of the Metro board through June 30, 2018.
(photo courtesy of the mayor’s office)

“When voters passed Measure M, they gave us a mandate to build a better transportation system and a more connected region, Now, we need to deliver,” Garcetti said. “I am honored to serve again as chair of this board and help build our network into a global model for public transportation infrastructure and service.”

Measure M will fund 40 transit and highway projects over the next 40 years and generate $860 million a year in sales tax revenues. The measure is expected to create more than 778,000 new jobs. Garcetti will work with Metro to create training programs that focus on economically disadvantaged communities in Los Angeles County so the jobs contribute to a strong local economy.

The next year is crucial for Metro’s agenda, as major projects under construction begin to take shape, including the Crenshaw/LAX Line, which is now 70 percent complete, the Regional Connector in downtown Los Angeles, and the Purple Line Extension subway beneath Wilshire Boulevard.

Garcetti is also committed to collaborating with state and federal partners to leverage local funds. The effort will help ensure that cities are rewarded with federal funding if they generate their own money for infrastructure. That federal effort is based on the Infrastructure Incentive Initiative, which leverages federal funding by rewarding regions like Los Angeles for bringing its own infrastructure funding.