Los Angeles Mayor Eric Garcetti broke ground on the automated people mover, a train which will connect travelers directly to airport terminals and create new and convenient locations for passenger pick-up and drop-off outside the central terminal area. 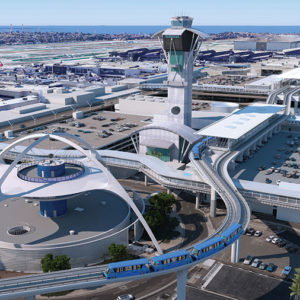 (photo courtesy of the mayor’s office)

“Everyone traveling to or from LAX should have access to modern, reliable public transportation that gets them to their destination on time,” Garcetti said. “The Automated People Mover is a historic investment in our city’s transportation infrastructure – a milestone that will create middle-class jobs, reduce traffic congestion, and deliver a world-class experience for travelers.”

Since taking office, Garcetti has guided forward a more than $14 billion transformation of LAX that began in 2009. Garcetti’s historic infrastructure investments have strengthened working families and the middle class. Under his leadership, unemployment has been cut in half and 212,000 new jobs have been created. Construction of the train is expected to create more than 2,000 jobs.

The train is the centerpiece of the Landside Access Modernization Program, which also includes a consolidated rent-a-car facility and associated roadway improvements. Once completed in 2023, the APM will connect with L.A. Metro’s light rail system.

Convenience, reliability and accessibility are at the heart of the project. Trains will arrive every two minutes, have wide doors for easy access, large windows for viewing, and plenty of hand holds and seats for those in need. Station platforms are open air and will have escalators, elevators, and moving walkways for quick access to the terminals. The trains will relieve traffic congestion and are expected to serve 30 million travelers annually from 2023.

On April 11, 2018, a 30-year, $4.9 billion contract with LINXS, the developer of the APM, was unanimously approved by the Los Angeles City Council, marking the largest contract ever awarded in the city’s history. Since then, LINXS has focused on finalizing the design of the guideway, operations systems, and stations along the 2.25 mile path, work that now allows for the start of major construction on the project. Through this public-private partnership contracting model, LINXS is designing, building, and financing the project and is also responsible for operating and maintaining the trains and stations for a 30-year period.