Los Angeles Mayor Eric Garcetti detailed a crackdown on illegal garbage dumping and enforcement against businesses that do not have legally required trash pickup service, as well as new resources – from cameras to crews – to help keep streets clean and neighborhoods safe. 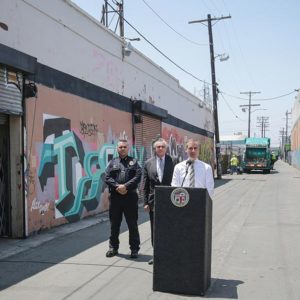 photo courtesy of the mayor’s office
Garcetti announced that “every Angeleno should take pride in how L.A. looks.”

“Our streets are not dumpsters,” Garcetti said. “Every Angeleno should take pride in how L.A. looks, and each one of us has a responsibility to keep our city clean and safe. We’re adding surveillance and clean-ups, and stepping up enforcement against businesses and individuals that act outside the law and put public health at risk.”

Businesses operating in the city of Los Angeles that are not in contract with trash hauling providers are in violation of the Los Angeles Municipal Code and subject to a fine of up to $1,000 and a six-month jail sentence. As part of the crackdown, the Bureau of Sanitation is referring 27 out-of-compliance businesses to the city attorney’s office.

Garcetti also announced an expansion of the Operation Healthy Streets zone south of Washington Boulevard, to provide cleanup crews in a community that has been heavily affected by illegal dumping. Additionally, the Bureau of Sanitation is expanding hours of surveillance to night shifts that will, at times, be undercover. The bureau will also install new cameras and lighting, and increase the number of city staff members inspecting businesses to ensure they are complying with the law.

Between January and April of this year, the Bureau of Sanitation collected an average of 228.2 tons of illegal dumping every week, up more than 9% from the same period last year, and has issued 25 citations to people caught breaking the law and dumping waste.