Approximately 2,225 cyclists will pedal along Santa Monica Boulevard on Saturday morning during the final leg of AIDS/LifeCycle, an annual 7-day ride from San Francisco to Los Angeles sponsored by the Los Angeles LGBT Center.

The riders raised $15.1 million for services for people with HIV and AIDS provided by the center and the San Francisco AIDS Foundation. They embarked on the 545-mile journey last Sunday in San Francisco and will finish at Fairfax High School on June 10. For many participants, the ride is a way to show tangible support for people with HIV and AIDS while uniting in solidarity. For first-time rider Jason Frazier, of West Hollywood, it symbolizes the power of an individual to overcome adversity. 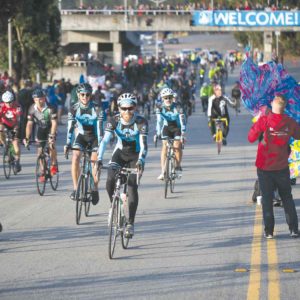 Riders embarked last Sunday on the annual AIDS/LifeCycle, which raises funds for services for people with HIV/AIDS. The riders will cross the finish line at Fairfax High School on Saturday.
(photo by Elizabeth Minor)

“I am HIV-positive and have been for over half my life. I was diagnosed in 1999 at the age of 24, and really wasn’t supposed to be here,” said Frazier, 43. “I was lucky. I was able to get on medication that saved my life. For those who are no longer here, that’s why I do the ride.”

Frazier said he also rides for the family members, doctors, nurses and caregivers who have helped him and others with the disease. The months of training required and the ride itself are challenging but rewarding, Frazier said. Although there is a sense of trepidation going into the ride, the experience of being on the road with hundreds of cyclists striving to achieve the same goal is empowering.

“The ride brings out a lot of deep feelings, and I didn’t know how it was going to go. But so far, it’s going great,” Frazier said on Tuesday. “The weather has been amazing. The rides have been challenging, but all of the training has helped. It’s great that the finish line is at Fairfax High School because we get to ride through West Hollywood. For me, to ride through my hometown as I finish is amazing.”

The AIDS/LifeCycle, held in early June each year, has become an annual tradition for many riders. This year marks the 16th annual AIDS/LifeCycle, but the event began in the 1994 as the California AIDS Ride, and it has always benefitted the Los Angeles LGBT Center and the San Francisco AIDS Foundation.

Los Angeles LGBT Center CEO Lorri L. Jean said although rider participation and the amount raised has “ebbed and flowed” over the years, the symbolism and spirit of the event remain steady.

“When we started in the 1990s, AIDS was the number one cause of death for adults in the U.S. The money we raised was absolutely critical to saving people’s lives. But as treatments got better, it took on new meaning,” Jean said. “This year, it’s going to take on a new importance because we don’t know what to expect with Trump budget cuts. We are anticipating there will be cuts for medication and AIDS-related services.”

Jean said a majority of people ride because they believe in helping people with HIV and AIDS and they have a connection in either being HIV-positive or knowing someone who is affected by the disease. The number of riders was down this year by approximately 200 compared to 2016, and Jean attributed it to “Trump fatigue.” A majority of riders sign up in the first months of the year, and Jean said some may have been overwhelmed by the current political climate.

“They were so freaked out by the election of Donald Trump that they didn’t spring into action,” Jean said. “But people gave more (monetary donations) this year, which was great. People wanted to give. “

Gil Diaz, communications manager for the Los Angeles LGBT Center, said the funds raised are critical to providing services, as well as raising awareness that the epidemic continues. In seven days – the length of the ride –more than 500 people in the United States become infected with HIV. Additionally, one out of eight people living with HIV nationwide is not aware of their status.

AIDS/LifeCycle has raised more than $236 million since it started. There are 1.2 million people living with HIV/AIDS nationwide and an estimated 39,000 will become infected this year, according to statistic provided by the center.

The riders stop each evening at locations along the route, and are supported by a small army of 683 volunteers known as “roadies,” Diaz added. The AIDS/LifeCycle Finish Line Festival is on Saturday, June 10 from 10 a.m. to 5 p.m. at Fairfax High School, 7850 Melrose Ave. Family members, friends and members of the public are invited to cheer on riders as they complete the journey. The first riders start arriving around 10 a.m. Off-site parking is available for $12 at the Petersen Automotive Museum, 6060 Wilshire Blvd., with a shuttle service starting at 10:30 a.m. For information, visit aidslifecycle.org.