Metro begins work next month on the Rodeo/Wilshire station

Metro is notifying motorists and residents that utility relocation work with Southern California Edison is expected to start in Beverly Hills in July for the Purple Line Extension Project. 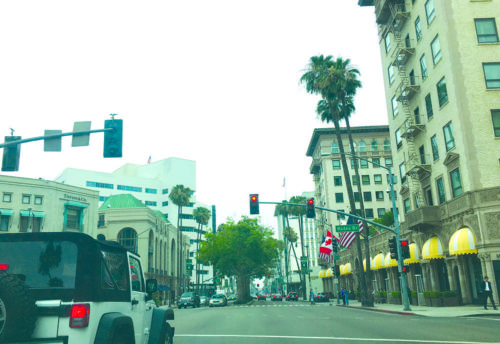 The intersection of Rodeo Drive and Wilshire Boulevard is expected to become the site of a future Metro subway station.
photo by Gregory Cornfield)

The Purple Line is moving west from its station at Wilshire Boulevard and Western Avenue. Construction for the first phase – which includes stations along Wilshire at La Brea Avenue, Fairfax Avenue, and in Beverly Hills at La Cienega Boulevard – started more than a year ago.

The second phase will continue west along Wilshire and includes a station at Rodeo Drive in Beverly Hills. It will then extend to the Century City station, and will eventually tunnel under Beverly Hills High School to get there.

The relocation work for the Rodeo Drive Station will begin on Wilshire between Crescent and El Camino drives, and South Reeves Drive between Wilshire and Charleville boulevards. The work will continue through the fall.

Metro hosted public meetings on May 31 and June 7 at Roxbury Park Community Center to spread the word about the construction schedule. Metro representatives will attend the City Council meeting on June 13 to request the permit to begin the work.

Metro selected the construction firm Tutor Perini/O & G as the contractor for second phase of the Purple Line Extension in January. The Metro board approved the $1.37-billion contract bid to build a 2.6-mile section through Beverly Hills. Earlier in January, Metro announced that the federal government agreed to allocate $1.2 billion in new grants for the project.

In 2016, a U.S. District Court judge decided not to issue an injunction to delay construction of the Purple Line Extension into Beverly Hills, however, Metro will be required to complete supplemental reviews, which it is doing now.

Metro is currently completing the pile work at the La Cienega station. Crews will continue to work from 7 a.m. – 8 p.m., and activities include saw cutting, potholing and pile installation to support excavation for the future subway station.

Metro will host a community art workshop at noon on Sunday, June 11 at the Beverly Hills Farmers Market at the 9300 block of Civic Center Drive. Metro will request help from residents for artwork ideas for the Purple Line Extension. Art supplies will be provided.

Completion of the second subway section is anticipated no later than 2026, and Metro is aiming to finish the project at an earlier date.

A third and final section will extend the subway to the Westwood/VA Hospital. Construction of the third section is planned to begin as early as 2019. Metro is now building the first section of the Purple Line Extension between the current subway terminus at Wilshire/Western and Wilshire/La Cienega with three new stations. Skanska-Traylor-Shea is the contractor for the first section.