More than 2,300 cyclists will hit the road for seven days beginning June 3 for the annual AIDS/LifeCycle, pedaling 545 miles from San Francisco to Los Angeles to raise funds for HIV/AIDS services.

In California, more than 128,000 people live with HIV, with 77 percent of all HIV/AIDS cases occurring among gay or bisexual men. In Los Angeles County, there are more than 60,400 people living with the virus, a majority of whom are male and Latino. More than 700,000 people have died from AIDS in the United States since the epidemic began in the early 1980s, according to the Henry J. Kaiser Family Foundation. 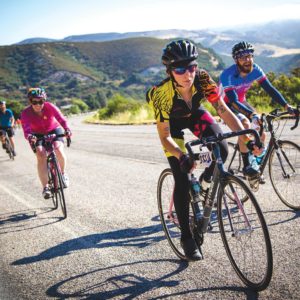 Over the course of seven days, riders in the AIDS/LifeCycle will bike from San Francisco to Los Angeles to raise funds for medical services at the San Francisco AIDS Foundation and Los Angeles LGBT Center. (photo courtesy of Gil Diaz)

The ride supports the San Francisco AIDS Foundation and the Los Angeles LGBT Center and the health services, such as HIV/AIDS testing, screenings and support, that they provide.

Riders and volunteer road crews will embark on their journey with an opening ceremony on June 3 in Daly City’s Cow Palace, and will make their way down the California coast with stops in Santa Cruz, King City, Paso Robles, Santa Maria, Lompoc and Ventura.

On the final day, June 9, cyclists will cross the finish line at Los Angeles’ Grand Park. This year, in honor of the ride’s 25th anniversary, marks the first time the finish line is in downtown. For the last two years, the finish was at Fairfax High School, and prior to that, it was located at the Veterans Administration Center in West Los Angeles.

The AIDS/LifeCycle is the largest annual fundraiser for HIV and AIDS in the world, with over $251 million raised through 2017. In addition to the 2,300-plus cyclists, the ride will feature 650 volunteer roadies helping along the way with supplies and care. Forty-three states in the U.S. and 16 countries will be represented in this year’s AIDS/LifeCycle.

“Our tireless riders and roadies have once again risen to the occasion, raising millions of dollars to make a difference in the fight against HIV and AIDS,” Los Angeles LGBT Center CEO Lorri L. Jean said in a statement. “Thanks to their hard work and the generosity of their donors, we will continue to be able to provide free or low-cost HIV testing and medical services – caring for those most in need and reducing the incidence of HIV infection.”

Along with their bikes and gear, many riders carry personal stories and struggles with HIV/AIDS. Andres Salazar Milano, 36, who will be participating in this year’s AIDS/LifeCycle, moved from his home country of Venezuela to Los Angeles to seek HIV treatment at the LA LGBT Center. He decided to join the ride “after seeing first hand how well they treat people” and the strong community that the organization provides.

In honor of those who have passed away from HIV/AIDS, Milano, with the help of three or more other cyclists, will be carrying a riderless bike as he crosses the finish line in Grand Park.

“The ride is important for telling people’s stories and seeing how far we’ve come,” he said.

Another rider, Isabeau Hansen, 26, who was raised by four friends, a lesbian couple and a gay couple, saw her dad test positive for HIV when she was 2 and then die when she was 14. A few years later when Hansen was 18, her dad’s best friend suddenly died from AIDS, about two months after he was initially diagnosed.

“I love that the ride is bringing resources to the community … and to see all of the support that really hasn’t been there for much of my life,” Hansen said. “It creates a space to talk about the illness.”

Beyond raising funds, many cyclists are participating in the AIDS/LifeCycle to raise awareness about HIV/AIDS. Adan Ramos Lopez, 22, a graduate student studying public health at California State University, Long Beach, is riding with the hope of bringing more attention to how the virus impacts communities of color in the U.S.

“I want to bring awareness to the issue, because it isn’t resolved,” Lopez said. “Rates are increasing for Hispanics and African Americans.”

Black communities in the Los Angeles area are roughly three times more likely to be HIV-positive than white communities, according to the Centers for Disease Control and Prevention. Additionally, among new HIV diagnoses in Los Angeles, 52 percent were Latino.

And yet, Lopez said, “Most people think it’s not a problem anymore.”

The AIDS/LifeCycle, with the amount of support and attention it garners, also serves to combat any negativity and shame surrounding HIV/AIDS.

“The ride helps erase the stigma behind HIV and people living with HIV. Even in California, there is a stigma,” Milano said. “People see it as a death sentence. People don’t look at you with regret when you tell them you have diabetes or that you have high blood pressure … But this event really nourishes all the people who think they are lost.”

Hansen began training in January with yoga and crossfit classes, as well as group rides on the weekends.

“I’m really nervous about the physical aspect about the ride, but I’m sure it will be fine,” Hansen said.

Lopez, who began training about three months ago, has been riding on the weekends, running and taking cycling classes to build up his endurance. He isn’t too worried about the biking part of the trip, but the daily camping has raised some concerns for him.

“I love my electricity,” Lopez said with a laugh.

Milano, who admitted he had little experience riding a bike, started training about two months ago with a team. Despite his inexperience, he remains positive knowing that the LA LGBT Center will be providing help along the entire route.

“I am super excited for the ride and to meet all of the people … The community is so full of love and support,” Milano said. “And I just want to encourage anyone to come out to the finish line to show their support.”