Please let ‘Everything Everywhere All at Once’ sweep 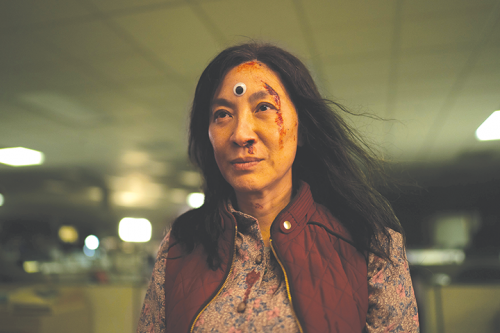 Michelle Yeoh is fantastic in “Everything Everywhere All at Once.” (photo courtesy A24)

A bonkers multiverse adventure leads the 2023 Oscars with 11 noms, per the Academy’s Jan. 24 announcement. This is the right answer. This is justice. And please, oh please, let “Everything Everywhere All at Once” decimate come awards Sunday.

Fun fact: a sci-fi flick has never won best picture. There’s certainly an argument for “The Shape of Water,” but that’s a monster story drawing upon fantasy tropes more than science fiction. Its genre hybridity is part of the appeal. But “Everything” is hard science fiction, the kind of story only this genre would permit.

For those in the know, “Everything” has everything: martial arts, romance, comedy, drama. More than anything, it’s a science fiction fever dream, unapologetically weird, batty, obscure. Characters make absurd choices – violent, perverse, hilarious – that all make sense thanks to the film’s internal logic. Good filmmaking educates spectators on the go, and great films go all in on a crazy concept.

Oddly, though, “Everywhere” is never ostracizing. This flick traverses parallels where a laundromat owner might instead be a scientist, action star or a rock. Yet it goes down so easy, so effortlessly. That likely has to do with the primary characters residing in rather ordinary surroundings at first.

What’s going on? Like “The Matrix” and “Inception” before, “Everything” establishes rules to verse-jumping, and we follow along as Evelyn figures out how to survive and then fight back. And she better learn quick because the foe seems unmatched, especially for a timid small business owner thrust into something she knows nothing about.

Writer-director partners Dan Kwan and Daniel Scheinert – the Daniels, they’re called – came outta nowhere with this magnum opus. This might be their sophomore feature, but the pair began directing music videos for Manchester Orchestra, Tenacious, DJ Snake and Lil Jon, namely 2013’s “Turn Down for What.” May they never go back.

How they came from premiering with Daniel Radcliffe as a spry corpse in “Swiss Army Man” to this ingenious film is beyond explanation. Frankly, properly explaining the true quality of this film is hard to articulate. 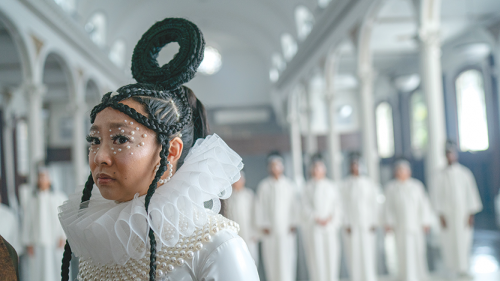 Stephanie Hsu is one of many dynamic characters in “Everything Everywhere All at Once.” (photo courtesy A24)

What can be said: Michelle is a treasure. She already took home a Golden Globe for her efforts, and to deny her again seems morally wrong. And Ke Huy Quan is back. You might remember him as Data in “The Goonies” or Short Round in “Indiana Jones and the Temple of Doom.”

Then he vanished. But not by choice. “Everything’s” critical acclaims and accolades earned him a spot on a Hollywood Reporter roundtable. Between that and Quan’s acceptance speech for supporting actor at the Globes, we experience someone so thankful to be back on screen after years of snubbing because of a historically unfair industry.

Stephanie Hsu, as Joy, also slays. But to say how gives away too much. Enjoy the ride free of spoilers. Add to that some splendid supporters: the legendary James Hong as Gong Gong, Jenny Slate as Big Nose and Curtis, as usual, showing off her incredible acting and action chops.

Along with best pic, “Everything” will be considered in three acting categories (Curtis v. Hsu in supporting actor), directing, editing, writing, score, original song and costume design. Please, please, please let it win them all. We need this. Cinema needs this. Yeoh deserves this. Quan deserves this. They all do.

“Everything Everywhere All at Once” isn’t just the best film of 2022. It’s the best film of the decade thus far. If Oscar doesn’t treat this masterpiece like the rare pearl it is, then we all deserve another year of coal at the box office.