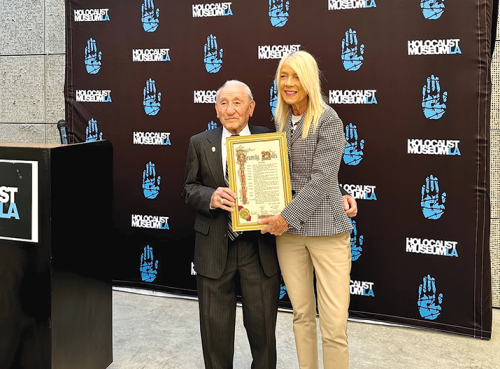 photo courtesy of the city of Beverly Hills

Beverly Hills Mayor Lili Bosse presented a proclamation on Nov. 20 to Holocaust survivor Joe Alexander on his 100th birthday. Holocaust Museum Los Angeles hosted a birthday celebration for Alexander, a survivor of 12 concentration camps including Auschwitz-Birkenau. Bosse honored Alexander with a special proclamation during the event recognizing his story and strength.

“He is here to bear witness and tell his story,” Bosse said. “And we are here to honor him and the millions of lives murdered, and stand up to hate.”