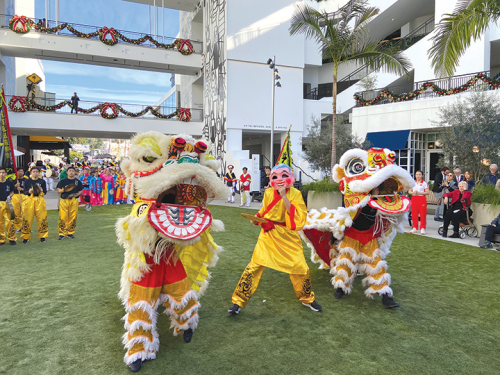 Chinese Lion and Dragon Dancers will be among the performers at the 90th annual Hollywood Christmas Parade. (photo by Edwin Folven)

Celebrities, floats, equestrians, marching bands, movie cars and performers of all types will make their way down the boulevard on Sunday, Nov. 27, during the 90th annual Hollywood Christmas Parade supporting Marine Toys for Tots.

The parade starts at 6 p.m. near the corner of Hollywood Boulevard and Orange Street. Grandstand seating for this year’s parade is sold out, but free viewing is available curbside along the 3.2-mile route. The Hollywood Christmas Parade will also be shown at 8 p.m. on Friday, Dec. 16, on The CW Network.

Organizers held a press conference on Nov. 21 at Ovation Hollywood to showcase parade performers including the Chinese Lion and Dragon Dancers, PAVA World Korean Traditional Band and Dinosaurs in the Valley, which will operate life-like dinosaur puppets on a parade float. Ninety celebrities and VIPS, 39 movie cars, 14 performers, 12 bands, 10 four-story character balloons and four floats will participate, with a grand finale of an appearance by Santa Claus and his reindeer to usher in the holiday season.

Many roads will be closed along the parade route, which runs along Hollywood Boulevard, Vine Street, Sunset Boulevard and Orange Drive. Parking restrictions will be implemented on streets around the route.

For information and a full line-up of participants, visit thehollywoodchristmasparade.org.