Light shines at the end of the subway tunnel 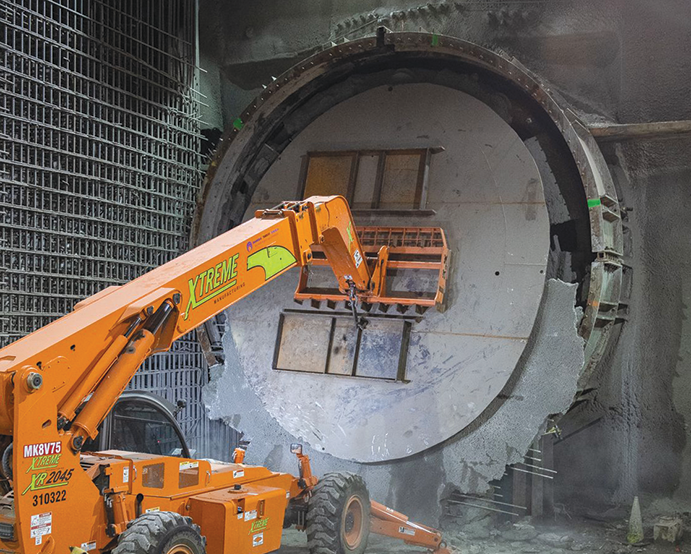 A tunneling machine recently emerged at the Wilshire/La Cienega subway station after completing a tunnel on the Purple Line Extension. (photo courtesy of Metro)

Tunneling for the first four-mile section of the project is now two-thirds complete, Metro officials said. More than 90% of the tunnels have been excavated and Metro anticipates completing tunneling on the first section this summer. Excavation for all three subway station boxes – Wilshire/La Brea, Wilshire/Fairfax and Wilshire/La Cienega – has also been completed.

Elsie, a 1,000-ton, 400-foot long tunnel boring machine, started heading west from the Wilshire/Fairfax station on May 29, 2020, and reached the Wilshire/La Cienega station on Feb. 25. The tunneling machines were manufactured in Germany by Herrenknecht AG. Metro contracted with the joint venture Skanska Traylor Shea to design and build the first section of the project.

Reaching the milestone is a significant accomplishment, Metro officials said. The high-tech tunneling machines have successfully mined through a unique combination of soils and geologic conditions, including tar sands and methane gas.

“Metro has reached yet another milestone as it works to bring fast, frequent and reliable subway service to the Westside,” Los Angeles Mayor and Metro Board Chair Eric Garcetti said. “Tunneling to Wilshire/La Cienega is a big step toward completing the first section to the Miracle Mile and Beverly Hills and connecting Angelenos to the many destinations in both of those communities.”

Metro’s tunneling machines were first lowered into the ground at the Wilshire/La Brea station location in the Miracle Mile in October 2018. The machines tunneled approximately 60 feet per day, excavating five days a week, 20 hours a day.

The closed-faced machines are pressurized and minimize ground settlement during excavation. The tunnel is lined with precast concrete segments that are bolted together to form a ring. Segments are also gasketed to seal the joints between segments from water and gas.

When tunneling on the first section is finished, both of Metro’s tunneling machines will have excavated nearly 500,000 cubic yards of earth, Metro officials said.

“This project is easily the most complex engineering feat in the modern history of L.A. Metro Rail construction,” Metro CEO Phillip A. Washington said. “The subway travels through some of L.A. County’s most densely urbanized neighborhoods and beneath some of our region’s most challenging geologic conditions. I’m glad that our project team has had such great success in tunneling through this area.”

The first section of the Purple Line Extension is scheduled for completion in 2023. For information, visit metro.net/purplelineext.