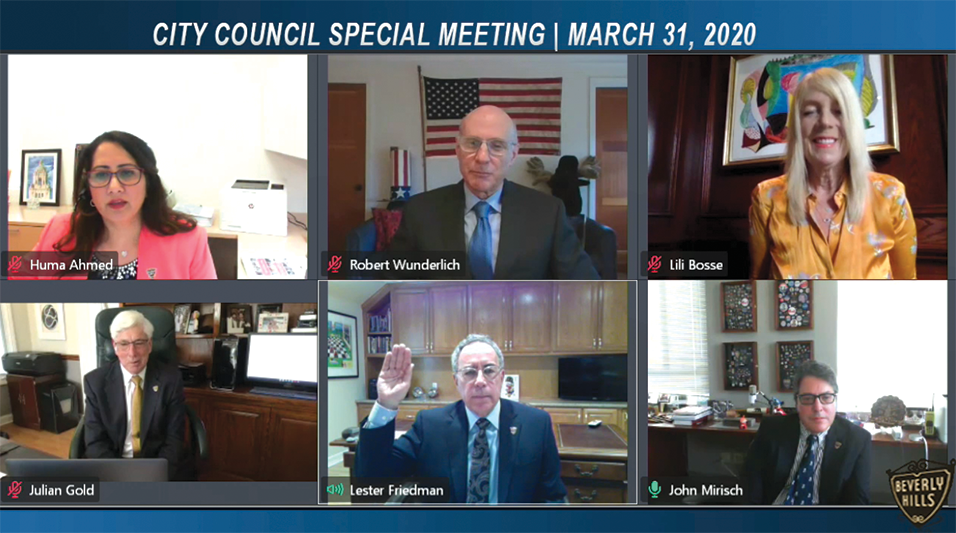 On March 31, the Beverly Hills City Council held the swearing in of the two winners of the March 3 election and chose a new mayor and vice mayor.

Contrary to last year’s reorganization meeting, which was held in the Academy of Motion Picture Arts and Sciences’ Samuel Goldwyn Theater and featured musical performances and lengthy speeches, the 2020 reorganization was held via teleconference as a result of the coronavirus pandemic.

On March 26, the City Council – in a joint special meeting with the Advisory Medical Task Force – canceled the celebratory meeting planned for April 6 and scheduled the installation meeting to be part of the March 31 council meeting.

All five council members addressed the impact of the coronavirus during their brief remarks. Councilwoman Lili Bosse, who was the top vote-getter on March 3 and thus won a third term on the council, thanked the community for “believing in me and trusting in me,” though she noted the ongoing coronavirus pandemic left her with “very mixed emotions.”

Councilman Julian Gold, who finished second on March 3 and also secured a third term, noted that the newly elected council members’ speeches, which are normally celebratory, had a much more serious tone this year. Like Bosse, he also appealed to the resolve of the people of Beverly Hills and painted a picture of a brighter future once the coronavirus crisis passes.

“As I was taking the oath, the part that struck me was the piece that said to defend against all enemies foreign and domestic. Now, we’re fighting against an enemy we cannot see … but it is an enemy we will be able to conquer, and conquer together,” Gold said.

Friedman and Wunderlich, who were both elected to the council in 2017, will serve in their respective positions for the first time.

Friedman said before the pandemic, when he was first planning a traditional celebration, he wanted to unveil a platform called “Beverly Hills Together.” While the coronavirus may change the emphasis of his platform, the title still fits, he said.

“The strong sense of community we enjoy in Beverly Hills should never be taken for granted … it takes Beverly Hills together to succeed, and together, we will,” he said.

Wunderlich, who noted that “this is not how I imagined what this day was going to be like,” echoed President Franklin Delano Roosevelt, who assumed office during the Great Depression and noted the dark times facing the nation while promising a brighter tomorrow.

“With our community and our dedicated city staff, we will succeed, and I promise I will do my utmost … I can do no less, and now – I can’t resist it – with Mayor Les on board, we can do more,” Wunderlich said.

The other four councilmembers also praised outgoing Mirisch, who they noted not only helped the city prepare for and react to the coronavirus crisis, but also helped Beverly Hills become more active in state politics and brought the city together with initiatives like his sing-along events.

“You really pushed us in new ways that we hadn’t done before,” Bosse said.

“There are few people who were better able to be in the position you were in while this thing developed, because you care for this village, to preserve it and to keep us healthy,” Gold added.