A Thanksgiving reflection on Stan Lee

On Nov. 12, Stan Lee passed away. The co-creator of Spider-Man, the Fantastic Four, the Black Panther and the X-Men is easily the most recognized name in the comic book industry, and his multiple cameos in Marvel films serve as a fan favorite dating back to 1989’s “Trial of the Incredible Hulk.” The number of appearances has even prompted a fan theory that Lee is actually a prominent comics character: a Watcher. 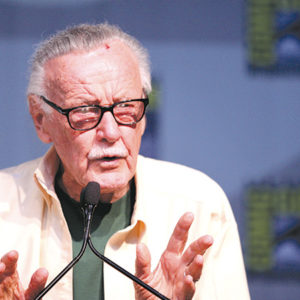 Stan Lee, shown at the 2010 San Diego Comic Con, was a legendary figure responsible for a major shift in pop culture. (photo by Gage Skidmore)

In Marvel Comics, the Watchers are aliens who observe other species from a distance. With so many cameos, Lee is a splendid candidate, always present to witness the Earth’s mightiest heroes during their finest hours. “Guardians of the Galaxy Vol. 2” even toys with this idea by featuring Lee telling stories to aliens who more overtly look like the Watchers.

Certainly, this theory rationally breaks down, but it’s a nice thought which helps us understand something key. Unlike other legendary authors and creators, Lee saw his creation blossom. That’s a far cry from the tragic artists we vampirically latch on to.

Consider the histories surrounding great figures like William Shakespeare, whose work was deemed popular playwriting, not high art, or Vincent Van Gogh, whose under-appreciation is the topic of a “Doctor Who” episode with an ugly-cry ending in which the painter sees firsthand his work on display. The list goes on with figures like Alfred Hitchcock, who never got his Best Director Oscar, and Orson Welles, shunned by the industry.

Lee would make an odd bedfellow with this list, but he bears some resemblance to another individual. Most don’t know the name Philip K. Dick, but his novels and short stories are commonly adapted, from films “Total Recall” and “Minority Report” to TV series “Electric Dreams” and “The Man in the High Castle.” But the adaptation of the novel “Do Androids Dream of Electric Sheep?” is a bittersweet moment in his career. Renamed “Blade Runner,” the film would soon help Dick ascend the ranks of science fiction.

Like comics, sci-fi had a lowbrow reputation. Eventually, the bourgeoise haze would give way to cinephiles, film historians and diehard fans embracing “Blade Runner” as one of best sci-fi films of all time. But Dick died in March 1982, three months before the film’s premiere. He would be remembered as an important sci-fi author whose stories tap into compelling philosophical and ethical topics, but he would never see the fruits of his legacy.

Stan Lee has. He helped grow a medium, expanded a media empire and set the groundwork for the fourth most profitable film in history, “Avengers: Infinity,” featuring Lee as Peter Parker’s bus driver indifferent about yet another alien invasion transpiring in New York.

Lee experienced many boosts in superhero media over the decades, but none compare to the superhero media boom alive now, in his lifetime. For decades, he was a charismatic spokesperson for comics at conventions, in college lecture halls, on television and throughout the comics he wrote and his “Stan’s Soapbox” column, where he championed tolerance and love.

From his days as a communications officer for the military during World War II to a special issue of “Spider-Man,” confronting drug use despite the Comics Code’s rules against such content, he believed in the power of comics to educate the public. A common theme throughout his career: art need not hail from formal exhibits or The New York Times Best Seller list.

Certainly, Lee can’t claim complete victory here. With great success comes great bemoaning, and pretentious critics and filmmakers alike continue to see superheroes and comics adaptations as the enemy. And yet a comic book-adapted zombie show remains one of the most watched on television and four of the top 10 films worldwide are Marvel Studios creations. This is Lee’s true power, freeing stories from the limits of reality. He leaves behind a cultural shift in pop culture.

And he saw that change. He is not the tragic artist or inventor who went unnoticed until a grad student unearthed his content a generation later. He has a rich legacy chronicled in journalistic and academic publications alike. He certainly met with challenges from his ill-fated Stan Lee Media venture and a complicated history with longtime colleague Jack Kirby, but the 95-year-old would not slip away unappreciated.

All those cameos are a reminder of Marvel’s history, and without them, Marvel Studios must try harder to remember its past. But while Stan Lee lived, many artists, stars, filmmakers, media personalities and, most importantly for the artist known as Stanley Lieber, fans bathed him in gratitude. That’s a Thanksgiving miracle. Nuff said.