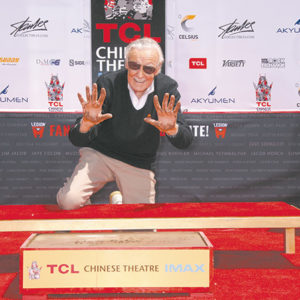 Marvel Comics’ Stan Lee placed his handprints and footprints in cement on July 18 in the forecourt of the TCL Chinese Theatre IMAX in Hollywood. Lee, the chief creative force behind the rise of Marvel Comics, created some of the world’s most famous heroes and infamous villains, including Spider-Man, The Hulk, X-Men, Fantastic Four, Iron Man, Thor, Daredevil, Dr. Strange, The Avengers, Loki and Dr. Doom. In 2017, Stan will celebrate his 95th birthday and the 78th anniversary of the day he first started in the comics industry at Timely Comics. The TCL Chinese Theatre IMAX is located at 6925 Hollywood Blvd. For information, visit tclchinesetheatres.com.

LACMA debuts exhibit on Chagall’s works for the stage