Armed private security guards are stationed in front of a building at 6362 Hollywood Blvd. that police raided last week to remove 66 people, including four juveniles, who were illegally staying in the four-story commercial structure. 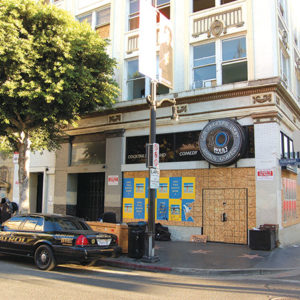 Security guards are stationed outside a building at Hollywood Boulevard and Cosmo Street where 66 people were removed last week. All of the people, who were living there illegally, were cited for trespassing, and 12 were arrested. The city has also filed charges against the building owner. (photo by Edwin Folven)

The building was boarded up after the raid and the security guards were hired by members of the family that owns the building. City officials said squatters were living in filthy conditions inside the building, located at the southeast corner of Hollywood Boulevard and Cosmo Street.

“I want to thank the Los Angeles Police Department for their dedication to keeping Hollywood safe,” said Councilman Mitch O’Farrell, 13th District. “The recent raids resulted in the confiscation of firearms, narcotics, and the arrest of people living in squalid, very dangerous conditions. I support the action taken by police 100 percent.”

On Sept. 13, Los Angeles City Attorney Mike Feuer announced that his office has filed 23 criminal counts against the owner, Mehdi Bolour, and his companies Palmer Building Associates LLC and Denley Investment and Management Company. An arraignment is scheduled for Oct. 12.

The site had been a focus of LAPD and Los Angeles Department of Building and Safety investigations since June, when it was discovered people were illegally entering the property. The building is zoned commercial and no one is supposed to be living inside, said Building and Safety Department spokesman Jeff Napier.

It is unclear how long people had been illegally staying inside the building. Police conducted a previous raid there in June and cleared the structure, but individuals returned. On Monday, items belonging to people staying inside remained along the sidewalk, and those items were gone by Wednesday. A security guard said people were being escorted inside to recover belongings.

Feuer said the situation could have resulted in a tragedy similar to a 2016 fire in Oakland in which 36 people died inside a warehouse nicknamed Ghost Ship. That building had allegedly been illegally converted into a living space for artists.

“Our office continues to work to prevent a tragedy like the Oakland Ghost Ship fire from happening here,” Feuer said. “Our actions at this location are just part of our sustained effort to target properties we allege pose a public safety threat.”

Kerry Morrison, executive director of the Hollywood Property Owners Alliance, which administers the Hollywood Business Improvement District, has been trying to “mediate” the effort to get the owners to comply with city orders to maintain the building and keep it secure. She said Bolour is in his 80s, and she has been working with his son David and family members, who are now overseeing the efforts. Morrison stressed that Bolour’s son has been “instrumental” in having the building cleared and boarded up and is actively working with city officials to mitigate problems at the site. Morrison said the building owner was not collecting rent from people staying there and it was unclear why more measures weren’t taken earlier to secure the building and prevent people from reentering.

Calls to Bolour and Palmer Building Associates were not returned. The LAPD and Department of Building and Safety will continue to monitor the site to ensure people do not return.

“I have never seen this happen before in Hollywood,” Morrison added. “It’s not a frequent occurrence.”