Once an A-list deity, Nick Cage now rules the dump months of January and September, when his B-movies and half-cocked actioners plague theaters and direct-to-video rentals. 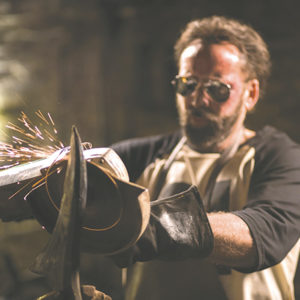 Nicolas Cage stars as Red Miller in “Mandy,” an arthouse film that is one of the best of the year. (photo courtesy of RLJE Films)

But even he can rise from the ashes of a wavering career with the help of a surrealist horror flick. Meet the most unexpected film of the year, “Mandy,” a masterpiece drenched in mood and stylistic excess unheard of in any cowardly blockbuster.

It’s 1983. Red Miller (Cage) chops wood for a living, but he cares more about his girlfriend Mandy (Andrea Riseborough), whose transcendence doesn’t go unnoticed by cult leader Jeremiah (Linus Roache). Cue the most ‘80s motley crew ready to rule the day that ever crossed a man who almost played Superman and did have his face removed by John Travolta.

Besides the Billy Idol roadies and “Deliverance” extras, let’s not forget the demonic ATV crew that does Jeremiah’s bidding. Think Pinhead and Swamp Thing at a mixer.

I can’t do this story justice. It’s a special kind of horror film, part “Mad Max,” exploitation film and ‘80s homage. And what’s more ‘80s than a brief appearance by Bill Duke (“Predator,” “Commando”) as Red’s hunting friend Caruthers talking about Red’s slim chances of survival. Another director’s cliché is this one’s reverence to film history.

More than any of that, however, “Mandy” is a fantasy film about a knight exacting vengeance on an evil ruler for coveting his little piece of the mystic realm. Symbolic imagery – mostly Jungian – replaces a simple shot of the moon and stars with planets all around. This isn’t Earth, but something else entirely. Red even constructs an ax suited for a paladin and slips into animated hallucinations of a nude Mandy standing in what I can only assume is Mordor.

Rather than hide the film’s visual language in cinematography and editing that attempts to cover its seams, “Mandy” is a stylistic wonderland that calls attention to its artifice. Psychedelic sequences, hand-drawn animation, landscape shots organized like a painting and lens flares that would make J.J. Abrams drool. Remarkably contemporary and retro, this is the kind of have-candy-eat-it-too palette championed by the best and most derivative of postmodern film offerings. This one belongs to that former contribution, though I imagine many impatient viewers will dismiss it as the latter. 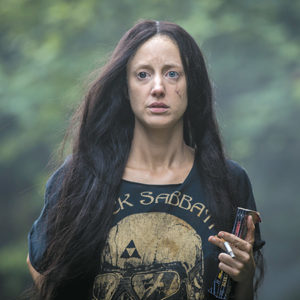 If abstract head trips are your thing, “Mandy” is a blast from start to finish, the kind of visual experience film school students envy and genre freaks freak out over. Horror cinema remains one the last truly creative spaces that can go its own way, less worried about alienating audiences with an obscure concept.

Cage’s performance is at top Caginess. We’re talking bees to the face à la “The Wicker Man.” And it works. I don’t know how, but it works. When he snorts coke off a shard of glass after snapping the neck of leather gimp, I believe him. His pain is my pain.

Composer Jóhann Jóhannsson (“Sicario,” “Arrival”) is on point here, setting a remarkable mood throughout the entire film. Alas, his original sounds will only grace two more films this year as he passed away in February not long after “Mandy” premiered at the Sundance Film Festival.

Jóhannsson is a familiar name, but director Panos Cosmatos, son of the “Tombstone” director, is a virtual unknown, with only one film credit from 2011. How he directed this and co-wrote it with Aaron Stewart-Ahn, known for music video and documentary work, is beyond me. But Cosmatos is sure to grab his next gig soon following such a crowning achievement.

“Mandy” is raunchy arthouse cinema, beautiful and over the top, disgusting and enchanting. That’s a rare combo, but it serves the film well. And somehow it puts a director on the map and a B-lister back in the spotlight. This is easily one of the best films of the year, but if you’re not sold yet, there’s also a chainsaw fight. Like two of them. Chainsaw on chainsaw. It’s brilliant.