Firefighters remained at the scene on July 11 of a 25-acre brush fire that erupted the previous day approximately one quarter-mile northwest of the Griffith Observatory. 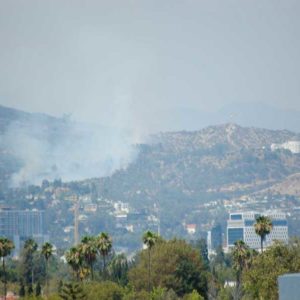 A large plume of smoke could be seen above the Hollywood Hills on July 10 after a fire erupted northwest of the Griffith Observatory. (photo by Edwin Folven)

Although the fire was contained and primarily extinguished by 5:15 p.m. on July 10, Los Angeles Fire Department personnel stayed throughout the night and next day to ensure no flare-ups occurred on the brush-covered hillsides. The cause of the blaze is under investigation, said LAFD spokesman Brian Humphrey. No injuries were reported.

Humphrey said the fire department received multiple 911 calls at approximately 2:10 p.m. on July 10 about smoke and flames near Western Canyon Road, which runs between Observatory Road and Fern Dell Drive. The fire was burning in approximately two acres of brush when LAFD personnel arrived.

Water-dropping helicopters and firefighters on the ground battled the blaze, which spread to 25 acres before it was contained. Approximately 2,000 people were evacuated from the Griffith Observatory. Park rangers guided them by foot down trails to the Greek Theatre parking lot. Shuttles took the evacuees back to the observatory shortly after 3 p.m. to retrieve their vehicles. Five vehicles parked along roads west of the observatory were damaged by the fire and had to be towed, Humphrey said. The Griffith Observatory remains closed as a precaution and will reopen on Saturday, July 14.

The LAFD used drones to monitor the fire scene overnight. The aircraft sensors determined ground temperatures exceeded 300 degrees where the flames had been, Humphrey added. Firefighters remained at the scene out of an “abundance of caution,” he added.

Griffith Park visitors are asked to be vigilant about preventing brush fires and to immediately report any smoke or suspicious activities. Humphrey added that smoking is prohibited throughout the park.

“We want people to be careful,” Humphrey said. “If you have any doubt about safety in the park, notify the rangers or call 911.”