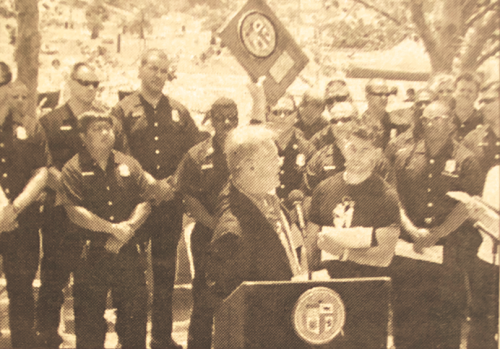 Former Los Angeles City Councilman Tom LaBonge honored emergency personnel who responded to a plane crash in the Fairfax District in this photograph in the July 24, 2003, issue of the Beverly Press and Park Labrea News.

On June 6, 2003, a small Beechcraft plane that took off from Santa Monica Airport crashed into a three-story apartment building at the corner of Clinton Street and Spaulding Avenue, killing all four people aboard the plane and a 76-year-old resident in the building.

LaBonge credited firefighters and other first responders for helping evacuate the building and preventing further loss of life.

Authorities later determined the pilot, Jeffrey T. Siegel, had alcohol and drugs in his system when the crash occurred and was likely impaired.