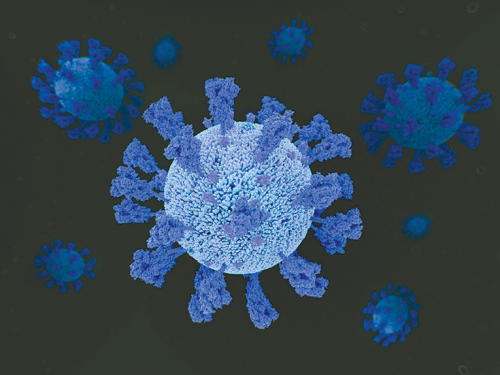 SARS-CoV-2 is thought to latch on to cells via spikes that exist on its surface. Tiny molecular motifs on the spike protein may have what scientists call “superantigen” characteristics. (photo by Getty)

Investigators at Cedars-Sinai have proposed a theory for how SARS-CoV-2, the virus that causes COVID-19, infects the body. Their hypothesis, published in Frontiers in Immunology, could explain why some people still have symptoms long after the initial infection.

SARS-CoV-2 is thought to latch on to cells via spikes that exist on the surface of the virus. The spike proteins are comprised of molecular motifs, stretches of amino acids that make a protein. The tiny molecular motifs may have what the scientists call “superantigen” characteristics, meaning that the immune system can overreact to their presence.

The spike protein may also have neurotoxic motifs that can cross the blood-brain barrier and damage brain cells. The hypothesis could explain the “brain fog” and other neurological symptoms associated with COVID-19 and long COVID.

The hypothesis is based on several published studies on COVID-19 and other diseases caused by viruses. One such study was published in the Proceedings of the National Academy of Sciences in 2020. Researchers created a computer model showing how molecular motifs on the spike protein interact with immune cells. The superantigen molecular motifs cause the immune cells to release an abundance of infection-fighting proteins known as cytokines that fight the virus but also may mistakenly attack the body’s organs. In children, this may manifest as MIS-C.

Other studies have reported that people with long COVID may carry fragments of the virus in their gut or other parts of their bodies months after initial infection. Continuous exposure to motifs that lodge themselves in different parts of the body and have superantigen-like properties may cause autoimmune symptoms in people with long COVID and MIS-C, according to the authors.