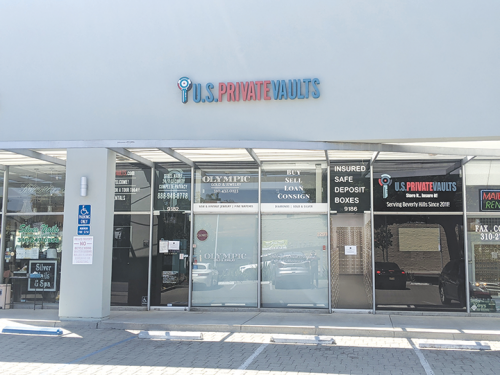 The company that owned and operated U.S. Private Vaults in Beverly Hills, which has been under investigation since at least March 2021 for allegedly renting safe deposit boxes that were used by some customers to stash drugs, valuables and cash, pleaded guilty to a money laundering charge in a plea agreement entered on March 2 in United States District Court.

U.S. Private Vaults, a company based in Nevada and registered as a California corporation, was formerly located at 9182 W. Olympic Blvd. It has been closed since federal agents raided the business on March 22, 2021, and seized drugs, firearms and large amounts of gold bullion, cash and other valuables from safety deposit boxes rented by private customers.

U.S. Private Vaults advertised that it offered safe deposit boxes that were safer than those in banks. The company was charged in a three-count federal indictment unsealed on April 2, 2021, alleging it allowed customers to store controlled substances in safe deposit boxes, that it conspired to offer safe deposit boxes for the purpose of hiding currency and valuables from the government, and that at least one employee was involved with arranging drug sales at the site.

As part of the agreement to plead guilty to money laundering, the company will be dissolved, and the government will drop the other charges. Fines and restitution imposed could be up to $500,000. The specific sentence will be determined by a judge at a future hearing.

The owners of U.S. Private Vaults, Mark Paul and Michael Poliak, were never charged. Federal authorities have remained tight-lipped about the case and declined to provide any comment, including why Paul and Poliak were not criminally charged. Thom Mrozek, a spokesman for the U.S. attorney’s office, provided a copy of the plea agreement but declined to provide further details.

In the plea agreement, the company admitted that it conducted transactions involving property that it knew was from the distribution of controlled substances. The company agreed to forfeit property seized and to not make any future claims against the government regarding the return of property.

The plea agreement places in question the future of property that was not illegal but was seized during the search last March at U.S. Private Vaults. Some of the property was returned to customers who filed claims with the FBI and proved their property was not involved in criminal activity. The exact number of customers who have received property back, or may be waiting to receive their property, was not available.

Robert Frommer, a senior attorney with the Institute for Justice, a nonprofit public interest law firm, represents seven customers who had property seized, and has filed a class action lawsuit against the government on behalf of dozens of other U.S. Private Vaults customers. He said the cases are pending as they make their way through the federal courts and vowed to continue putting pressure on the government to return the property to its rightful owners.