E-scooter program is a go 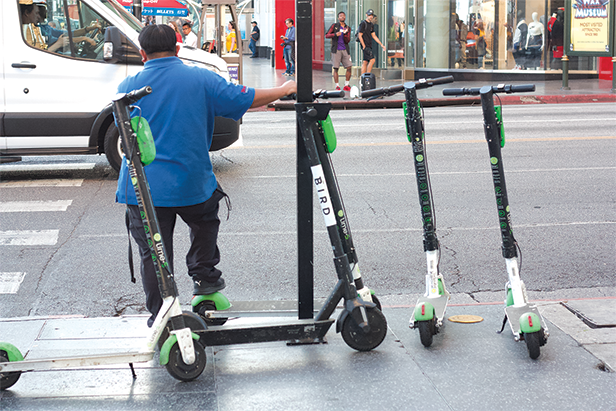 Bird, Lime and Wheels are back on the streets – and hopefully not the sidewalks – of West Hollywood, as the city launched its dockless mobility pilot program for e-scooters and e-bikes last week with few issues, city officials said.

The 18-month pilot program began on July 1. Thus far, the only issue has been riders parking the devices in unapproved areas, such as sidewalks, Councilman John Erickson said. That is to be expected with a new program; it will be a process, he added.

“That’s an education campaign, and we can’t let the actions of a few bad actors scare us off from making better transit opportunities for our residents,” Erickson said, adding that he had not heard of any injuries associated with the launch.

According to city regulations, riders must have a valid driver’s license or instructional permit, and only one person is allowed on the devices at a time. The program calls for users to stay off the sidewalk, ride as far to the right of a traffic lane as possible and use bike lanes when available.

Parking Operations Supervisor Coby Wagman, one of the program administrators, said helmets are only required for riders under the age of 18. However, enforcing that rule will have its challenges, he said, adding that city staff members are meeting with representatives of the West Hollywood Sheriff’s Station today to discuss the program.

Ultimately, it would be at the discretion of the sheriff’s department to cite any riders who are using the devices illegally, Wagman said.

He couldn’t specify how many have participated in the pilot program to date, but the city will have data to analyze in the next month or two. Like Erickson, Wagman said he had not heard of any injuries and that the only complaint so far has been improperly parked devices.

“It’s actually been a very good roll out,” he said. “Usually, [improperly parked devices are] the result of a customer not being aware of the parking rules or just not paying attention.”

The city has designated more than 10 “corrals” for riders to park the devices. While the city recommends using the corrals, Wagman stressed that users are permitted to park the devices in an off-street location that does not block pedestrian access to the sidewalk.

West Hollywood has contracted with ABM, which provides parking management services for the city, to help manage the pilot program. Wagman said the company will field and respond to complaints about the pilot program from 7 a.m. to 10 p.m. daily.

“This is all a really good opportunity to obtain those best practices, especially since every community is a little different,” he said, adding that city staff will be monitoring the program “very closely.”

Feedback about the e-scooter program has been mixed since it was introduced. Manny Rodriguez, vice president of the West Hollywood West Residents Association, said there are a number of residents who do not support it.

Generally, he does not have an issue with the e-scooters themselves; instead, he takes issue with the business model. Rodriguez said the companies operate on a false premise: that riders will use the devices in a safe manner to get to and from their jobs.

“That is a miniscule number of people that are using them lawfully and to go to work,” he said, adding that he believes the devices are nothing other than a joyride. “It really opens the door to unaccountability and this disposable attitude about this device.”

Rodriguez said he has seen riders on the sidewalk and e-scooters abandoned, including one that had been on Melrose Avenue for four days. He said he doesn’t see how the city will keep e-scooters from impacting pedestrians.

“They’re not going to stop for you, and the sheriff is not interested,” Rodriguez said. “So far, I’m not impressed, and I think West Hollywood is kidding itself if they think they can tame this reckless, impulse-driven, unaccountable business model.”

Rodriguez suggested that residents interested in utilizing the devices look into purchasing a scooter instead.

Erickson said that, a few years ago, he rode an e-scooter to help him get to his job downtown when his car needed repairs. He said he has not used one since the pilot program  began, but he plans to ride and park it responsibly.

“This is the type of stuff that helps with climate change … and only further emphasizes how we think about how people get around,” the councilman said.

However, safety is a major concern, especially for members of the city’s disabled and elderly communities, Erickson said.

“We want to make sure they can be on the sidewalk without the fear of getting hit by a scooter,” he added.

Erickson said the city will continue to tweak the program to ensure that it is being utilized in a responsible manner. He said there are many residents who support the program, as evidenced by the number of people who discussed it with him while he was campaigning for City Council.

“Obviously, there are always going to be individuals who do not want this,” he said. “We have to rely on data and what is working best for our city.”