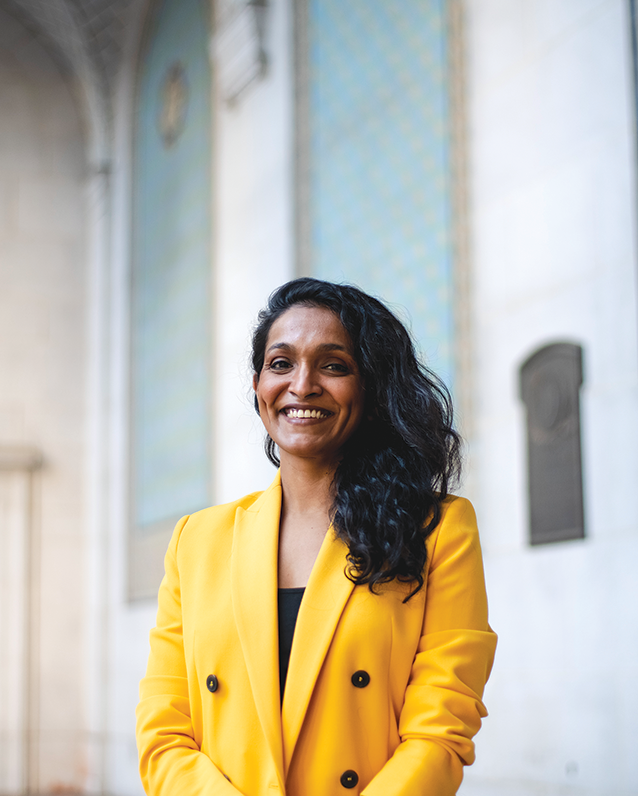 Los Angeles City Councilwoman Nithya Raman outlined plans for addressing issues in the 4th District and responded to criticism that things aren’t moving forward quickly enough in her first interview with the Beverly Press and Park Labrea News since being elected in November.

Raman, who was elected after unseating incumbent David Ryu, championed help for the city’s unhoused population during her grassroots campaign. She said her first few months in office were spent assessing the magnitude of homelessness in the district and connecting with different city agencies and departments.

Raman also said she has been hiring staff and getting up to speed with issues affecting specific neighborhoods, and she is trying to meet with as many community groups as possible. She asked for patience from those she hasn’t met with yet, and said she is committed to building more relationships as quickly as possible.

Raman acknowledged that the city is facing dire problems due to homelessness and a lack of housing, and there is a need for urgent action. As the city moves forward in recovery from the COVID-19 pandemic, she is eager to move her virtual meetings with community groups to in-person encounters.

“I am really excited to [start] doing these meetings face to face, because they will result in deeper connections than the digital interface allows you to do,” Raman said. “When I first got into office, it was when all of the most severe restrictions were happening, and I remember very clearly what former Councilman LaBonge told me, and that is, ‘You and your staff always have to drive the district.’ It was ironic that it was one of the only things I could do during those early weeks, so I did a lot of that and so did my team.”

Raman said there are no easy answers, particularly to homelessness, but the city is taking steps to provide more relief for people living on the streets. One problem, Raman said, is a lack of coordination between different agencies addressing problems in specific neighborhoods. She said the Los Angeles County Homeless Services Authority may be providing outreach and services at one encampment, while another county or city agency, or private organizations that partner with local government, are operating independently at nearby encampments. A more comprehensive grassroots effort in which community organizations play a role in neighborhoods is crucial, she said, and cited the Center at Blessed Sacrament, which provides services to unhoused individuals in Hollywood, as a model that should be replicated.

“Essentially, the way outreach works in the district is that there is a patchwork of providers. Because outreach is coordinated at [the county level and] the money comes directly from Measure H, it’s not organized at the level of the council district,” Raman said. “There is this really big patchwork of agencies and groups that are going out to different places. So when we, as a council district, are going out to address these different encampments, whether they be [issues] related to pedestrian walkability or garbage or whether it be related to criminal activity, we need to be able to know who is out there, what information they have.”

Raman added that she understands neighborhood frustration, and she is frustrated too that things aren’t moving quickly enough. In regards to an encampment in the Los Feliz District near Berendo Street and Hollywood Boulevard, where neighbors have been critical about a slow response in addressing crime and public health issues, Raman said a more coordinated focus is being placed on getting people into housing, but it will take time.

“We had a meeting with the LAPD and they told us that the encampment [in Los Feliz] has been there in some shape or form for nine years. We have already gotten people housed there, we are spending a huge amount of time on it and we have made progress there already,” Raman said. “I share people’s impatience and frustration, and that’s why I ran for office. All I can commit to is saying we are putting an incredible amount of time and effort into this, but we think we can do better.”

Raman also said her plans for addressing homelessness include partnering with churches and synagogues, nonprofits and neighborhood organizations, and asked anyone interested in offering support to contact the office’s homelessness coordinator, Liz Oh, by emailing liz.oh@lacity.org. Raman is still pursuing a plan to create a neighborhood drop-in center for people who are unhoused where they can use restrooms and take showers and meet with service providers.

The councilwoman said she is not considering plans to extend the use of the Pan Pacific Park Recreation Center for services for the homeless population. Parks and other community-serving locations are not appropriate places for such facilities, she added, and the facility in Pan Pacific Park will close at the end of May.

Raman is encouraged by positive developments in possibly resolving a lawsuit that currently precludes the city from removing tents from sidewalks. Discussions are ongoing about a resolution that would enable the city to remove tents and encampments if it commits to providing permanent housing.

“I think the most exciting thing about the case is that it’s going to commit the city to very ambitious goals for housing construction and shelter provision, and I think that sense of urgency has already moved us to having many more housing options than we did a year ago,” Raman said. “I do think it’s really important that [it’s] not just the city taking this on, that we work more closely with the county. We desperately need more targeted mental health services, we desperately need more mental health crisis beds, we desperately need substance abuse support, and these are things we need to be talking about as well.”

Optimism about the pandemic recovery is leading to opportunities, she said, and her staff has been advising businesses about resources available and helping them apply for loans and other relief.

To ensure an equitable recovery, Raman stressed more community partnerships. The councilwoman said she has met virtually with community groups, homeowner associations and the Mid City West Community Council and Greater Wilshire Neighborhood Council, for which she committed to better helping businesses thrive in Larchmont Village. John Winther, a member of the Greater Wilshire Neighborhood Council and president of the Larchmont Boulevard Association, said he is encouraged that the councilwoman is willing to help, and added that the effort is in its early stages.

“We have spoken with her about it,” Winther added. “I think it’s too soon to say much. She is still new to the game, but I think the future is in front of us and am hopeful about making progress.”

The Sycamore Square Neighborhood Association also met with the councilwoman.

“We have a fledgling relationship and we have begun working regularly with the council office,” said association president Conrad Starr. “We were joined by Councilwoman Raman and two of her staff members at our February board meeting and look forward to continued engagement.”

Raman said the Miracle Mile is an important part of the 4th District and promised to spend more time ensuring things are on track with major projects, including the opening of the Academy Museum, re-envisioned Los Angeles County Museum of Art and the Purple Line Extension subway project.

“I have met with the people from the institutions, both the Academy Museum and LACMA,” Raman said. “We have had our initial meetings and now that we can do more in-person stuff, I am going to be going out to visit those sites and to see … what they have achieved already.”

She also cited other projects as potential catalysts for progress, including plans to renovate and expand studio space at Television City in the Fairfax District, and the new subway project, scheduled to open in 2023.

“With the Purple Line, I think we have an opportunity to really make sure that we are being thoughtful about how this becomes a center of tourism and of work and recovery in these coming months and years. Obviously, a lot more people are going to be visiting these areas, people are going to be using the Purple line, and we have the opportunity to say, as we look around those areas, ‘how do we make it a place where these new investments will have the least impact?’”

Steve Kramer, president of the Greater Miracle Mile Chamber of Commerce, said Raman is expected to appear at the chamber’s monthly meeting on Friday, May 14, and he is looking forward to building a stronger relationship with the councilwoman and her staff.

Oh please. Raman was arrogant as helll in the campaign. I was at one event where she literally said “finding empty lots to build on is easy”. When one of the attendees questioned her, Raman said “you’re just not well informed.”

Raman is in bed with the developers. And I don’t think she even knows it.

Voted for Raman and donated to her campaign, and boy do I regret it. She frequently leaves neighborhood council meetings early, is vague and even combative. Her office is much less communicative and responsive than Ryu’s. She doesn’t seek community input and isn’t transparent.

What a shame. We all had high hopes for her.

Raman needs to act quickly on the homeless encampment on Berendo and Hollywood Blvd. It’s just a matter of time before someone is seriously hurt or killed. The encampment is less than a mile away from Los Feliz School. Kids have to walk in the street to get to school because of the encampment (they could get hit by a car), and even if a path is cleared to meet ADA standards, it’s still very dangerous. Many of these homeless people are mentally ill ,exhibit unpredictable behaviors, openly do drugs, urinate and defecate in public, and are naked in front of children . The homeless encampment must be completely removed from the sidewalk. If something happens to any student, it will be too little too late. Ms. Raman, you have the power to remove the encampment.