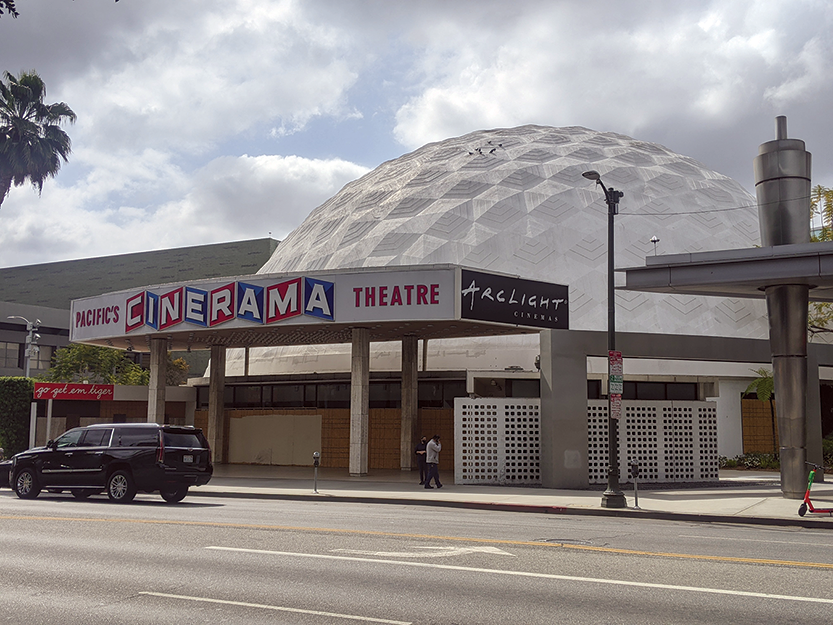 Film lovers have launched a petition to save the historic Cinerama Dome on Sunset Boulevard. (photo by Justin Sayers)

Pacific Theatres and ArcLight Cinemas’ announcement this week that they would not reopen following the coronavirus pandemic sent shockwaves through the movie industry, leaving the immediate future of two popular theaters in doubt.

The owners of the company shared the “difficult and sad news” in a statement on their website on Monday, April 12, saying they won’t be reopening any of their locations, which includes the historic Cinerama Dome and the Pacific Theatres at The Grove.

“This was not the outcome anyone wanted, but despite a huge effort that exhausted all potential options, the company does not have a viable way forward,” the statement said. “To all the Pacific and ArcLight employees who have devoted their professional lives to making our theaters the very best places in the world to see movies: we are grateful for your service and your dedication to our customers. To our guests and members of the film industry who have made going to the movies such a magical experience over the years: our deepest thanks. It has been an honor and a pleasure to serve you.”

Representatives from Pacific Theatres did not respond to a request regarding plans for the future of the dome and The Grove theaters. The announcement came just weeks after the Los Angeles County Department of Public Health allowed theaters to open and expand capacity to 50%.

The decision prompted public outcry from well-known actors, directors and producers, along with politicians, who took to social media to react to the news.

“I’m so sad. I remember going to the Cinerama Dome to see ‘Star Trek IV’ with my dad when I was little. So many memories since then,” actor Joseph Gordon-Levitt said on Twitter.

“Well this sucks. Every single person who worked at the ArcLight loved movies, and you felt it. Sending love to every usher, manager and projectionist who rocked that blue shirt and made it such a special place,” said Rian Johnson, director and producer, on Twitter.

“The closure of ArcLight Cinemas and Pacific Theatres is very disappointing, especially as the City of Los Angeles continues to make strides toward fully reopening. I, along with many of my constituents, will miss meeting a friend and seeing a movie at the ArcLight,” Los Angeles City Councilman Mitch O’Farrell, 13th District, said on Twitter. “The historic features of the Cinerama Dome make it an iconic building in Hollywood, and a flagship theatre for any operator. The city stands at the ready to help protect this beloved resource, which is already an officially designated Historic-Cultural Monument in Los Angeles.”

Film lovers especially have expressed concern about the future of the Cinerama Dome on Sunset Boulevard, which was built in 1963 and received historic monument status in 1998. The dome has showcased the work of some of the most famous directors, including Stanley Kubrick, Quentin Tarantino and Steven Spielberg. A petition to “Save the Cinerama Dome” has garnered more than 7,000 signatures on change.org in a day.

“The dome is just as important as the Chinese Theatre – I would say even more-so in recent years,” said Alison Martino, a television producer and founder of Vintage Los Angeles, which documents the city’s history. “If L.A. loses the dome, I would probably move. I might move from L.A. I don’t think I can handle that one.”

Martino, who said that her “heart sank” when Pacific Theatres made the announcement, said that the loss of historic theaters is devastating to a city where the movie industry is such a big part of its history. She said people still talk about the loss of the Mann National in Westwood more than a decade later.

Despite the closure, Martino expressed confidence that somebody will step in to operate the theater – and that combined with the fact that the historic landmark status makes it impossible to demolish the building without a drawn-out public process, there is probably good news for the dome’s future.

“There’s too many people in this town – too many, too many movie-goers, too many studios, too many production companies, too many directors, too many actors – that don’t want to see that be demolished or turned into a Sephora or like an Anthropologie,” she said.

“Our properties have always been inspired by the art of filmmaking and the magic of Hollywood – in fact, early in our history, we consulted with set designers to help us reimagine a whole new shopping experience. While we are sad to see [Monday]’s news, Angelenos and moviegoers across the country can rest assured knowing that there will always be a place on our properties to revel in the shared experience of watching a film together,” he said in the statement.

“Los Angeles is the epicenter of the film industry, it would be an unimaginable loss to our city if we were to lose this critical touchpoint and the ability to celebrate storytelling and the magical ways it can bring all of us together. In 2002, we built and operated the theater at The Grove for several years to such success that it wasn’t long until multiple theater operators approached us to purchase the asset; we ultimately selected Pacific Theatres. Our theaters have consistently performed among the top in the country, so I have no doubt in my mind that this is what our guest is looking for – that this is a part of the very culture that defines who we are as Angelenos,” he said.

I knew Mr. Caruso would come thru to save the Grove theater ! Now we need someone to step up and commit to making the Hollywood Cinerama Dome continue as a filmmakers’ and film lovers’ paradise. It’s LA where awards, premieres, and movie making is our heartbeat / please tell me it’s going to be ok!