Power outages occurred throughout the Los Angeles area from July 6-9 in sweltering temperatures, prompting calls from Councilman David Ryu for better coordination and communication between the Los Angeles Department of Water and Power and its customers. 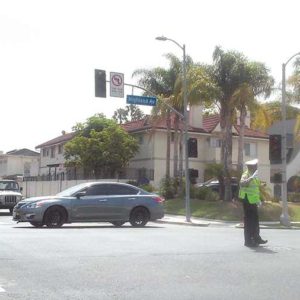 Street lights at the intersection of Highland Avenue and Sixth Street were still out on Monday because of outages caused by the recent heat wave. (photo by Edwin Folven)

Approximately 74,000 LADWP customers were affected at different times over the three-day period.

For some in the local area, the electricity was off for nearly 72 hours. On July 8 by 10 a.m., more than 4,850 people were still without power in Koreatown and 1,200 customers experienced outages in the Mid-Wilshire area. Dozens to hundreds of customers in the Beverly Grove, Miracle Mile and Hollywood areas were also without power.

By Monday evening, temperatures lowered to the mid-90s and power had been restored to most areas. LADWP Chief Operating Officer Marty Adams said the heat wave caused aging equipment and infrastructure to become overloaded by demand, resulting in outages. Crews worked around the clock to repair electrical distribution stations and transformers, but the time needed for repairs sometimes ran past estimates by hours and days.

“The power went out at my house at 4 o’clock on Friday and came back on Monday morning at 3:20 a.m.,” said Iris Peterson, a resident of the 200 block of South Plymouth Avenue in Windsor Square. “I called the customer service line. They were sarcastic and basically told me I live in a 100-year-old city and the infrastructure hasn’t been upgraded and, ‘what do I expect?’ I expect my power not be out during the three hottest days of the year.”

Peterson said she had to throw away $500 to $600 in food and faced almost unbearable conditions in her home. She plans to file a claim with LADWP for the loss.

Elmwood Avenue resident Karen Gilman said her family endured a power outage that began Friday night and forced them to stay in a hotel. Janet Charlton, a resident in the 300 block of South Rossmore Avenue, said the electricity at her home was off for nearly 72 hours. In Charlton’s case, power was off on one side of the street and on the other side because they operate from different electrical grids, she said.

Ryu criticized the LADWP for not communicating effectively with customers.

“This heat wave left tens of thousands of Angelenos without power or answers on when power would be restored. It’s one thing to lose power, it’s another thing entirely to go day after day without any answers. This lack of information from LADWP was unacceptable and unsafe,” Ryu said. “While I am incredibly grateful to the teams on the ground who worked extra shifts in high heat to restore power, changes must be made at LADWP. [The] outages provide an opportunity for LADWP to assess its grid, study the weak points and provide the city with a substantial analysis of the changes that need to be made to ensure this kind of widespread outage doesn’t happen again.”

Adams said Ryu and the LADWP were in frequent contact over the weekend and both helped notify residents about estimated time for repairs. He added that Ryu and the utility used social media to keep residents informed, and the LADWP customer service staff was increased and briefed with information as quickly as possible so it could be relayed to customers. In addition to answering calls, LADWP customer service staff disseminated information about outages via emails and posted updates on the utility’s website.

The problem, Adams said, was that crews working on damaged equipment sometimes provided time estimates for having power restored, but then encountered additional problems after the work started, and the amount of time needed was extended by hours or days. He agreed that more work needs to be done to repair electrical infrastructure to limit future outages. The utility will also examine ways customer service staff can more quickly disseminate information to the public.

“We had a lot of outages and unfortunately didn’t have the level of information we would have liked to have had to communicate,” Adams said. “I understand it’s frustrating. We haven’t seen this type of demand.”

The temperatures on July 6 reached 108 degrees in Los Angeles, and it was the highest July day ever in terms of LADWP energy demand. Approximately 700 outages occurred on different electrical grid points throughout the city, each requiring an LADWP crew for repairs.

Adams added that the LADWP usually experiences the highest demand for electricity in the San Fernando Valley because of high temperatures, but the Los Angele metro area also endured higher-than-normal summer temperatures during the recent heat wave. He said that the Mid-Wilshire area has some of the oldest electrical infrastructure in the city – some dating to the 1920s through 1940s – and much of it is underground. Crews took longer to access damaged equipment in many cases.

The LADWP over the past three years has been replacing aging electrical equipment through its Power Reliability Program with priority placed on replacing old wires, poles and distribution equipment. The recent heat wave identified new areas of vulnerability that will be addressed, Adams said. LADWP plans to invest more than $1 billion from its budget over the next five to 15 years on infrastructure. The utility also plans to hire more dispatchers to fill vacancies, which will help improve communications about outages and enable the utility to provide information more quickly to customers.

Mayor Eric Garcetti on July 9 said the city and the LADWP were providing information as quickly as possible during the heatwave and urged residents to conserve energy during the coming summer months. He cited climate change as a factor increasing energy demands, and said the city is looking at ways to address future problems caused by climate change and other factors.

Ryu added that electrical infrastructure improvements are necessary, as well as better ways to communicate and serve customers.

“My first priority is ensuring power is restored for every home and business of Council District 4,” Ryu added. “My second is ensuring that their power is reliable, and that the public has improved access to accurate, real-time information from LADWP.”

“It’s very frustrating,” she added. “This is unacceptable.”