As many Los Angeles County cities are working to regulate and create pilot programs for the newly ubiquitous electric scooters, the West Hollywood City Council affirmed its ban of the scooters and all on-demand personal mobility devices at its July 9 meeting. 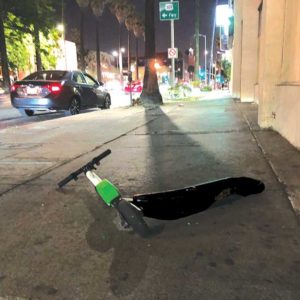 Scooters blocking public rights of way is one of the concerns local officials have. (photo by Luke Harold)

Council members also rejected a proposed pilot program. The ban will result in fines for companies that own the scooters, particularly Lime and Bird, if scooters are left in public areas within West Hollywood. Riders will not receive any penalties. Council members left open the possibility of a future amendment that allows hotels and other private businesses to partner with the companies.

The scooters, accessible through smartphone apps, have been popular with tourists who use them to explore the local area, and residents who use them to avoid their cars for short trips. But cities have been concerned about riders zipping down public rights of way at up to 15 mph, and then leaving them in the way of pedestrians. Bird and Lime advise riders to stay off sidewalks unless local law allows them to, but riders have commonly used sidewalks.

“I don’t think West Hollywood has the infrastructure for these scooters at this time,” Councilwoman Lauren Meister said.

Mayor John Duran added that the city’s streets and sidewalks don’t have the space to accommodate them.

“I just don’t think West Hollywood’s ready yet,” he said.

Councilman John Heilman said he recently walked from City Hall to Gelson’s, and had to move a scooter that had been left in the middle of a sidewalk out of the way of a blind man.

“Some of the operators of these scooters are not operating them in a responsible way,” Heilman said.

Impending regulation or bans haven’t hindered the value of the companies so far. Lime announced that it raised $355 million from investors including Uber, which plans to make Lime scooters available in its ride-hailing app.

“As electric scooters grow in popularity and become a more beloved way to travel short distances, the partnership adds to Uber’s vision of becoming a transportation platform for people around the globe,” Lime co-founders Toby Sun and Brad Bao said in a statement. “We are working to co-brand our scooters and make Lime available in the Uber app, with more news to follow. We could not be more thrilled about this partnership and what it brings to riders everywhere.”

Mayor Pro Tem John D’Amico, the lone no vote when the council first voted on the ban last month, and again this week on the revised version, said previously that it was “short-sighted” to ban the devices.

“This is the first time this many people under 35 have shown up for anything,” he said, noting the mostly younger public speakers who addressed the council with a wide array of opinions.

The Los Angeles City Council is working at the committee level on regulations for the scooter companies.

“As it pertains to dockless scooters, Councilmember Ryu believes helmets are important for the safety of riders, and ensuring that the public right of way is clear on sidewalks,” Pampanin said. “Furthermore, ensuring neighborhoods are not blighted with improperly parked scooters is another important aspect that should be addressed.”

Councilman Mitch O’Farrell is “monitoring the discussion as it makes its way through the public process,” Tony Arranaga, his spokesman, said.

“The scooters do help solve our first mile, last mile issues getting people to and from public transit and to short destinations without cars,” she said. “However, we are hearing complaints such as dangerous riding on sidewalks and blocking the right of way, which are already illegal. As this is a somewhat new phenomenon, the city is working on establishing a set of regulations and we hope this will help mitigate some of the issues, while providing an alternative mode of transportation.”