This Sunday, Dec. 31, join together with friends and family to celebrate the new year at the annual Grand Park + The Music Center’s N.Y.E.L.A. 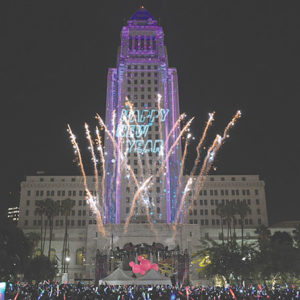 The West Coast’s flagship New Year’s Eve celebration offers music and dancing onstage, as well as on the dance floor and throughout Grand Park. The evening will include a free interactive motion-graphic activation that audiences can bring to life with their own moves and a New Year’s countdown, featuring 3-D digital video mapping on the side of the City Hall.

Grand Park + The Music Center’s N.Y.E.L.A will feature two stages with live music, DJs and dancing throughout the night, and a digital dance zone, along with a light and pyrotechnics show to also countdown to 2018.

The Countdown Stage will be hosted by D’Lo, while the The Beat Junkies, featuring DJ Babu, DJ Mr. Choc and DJ Shortkut will host the Get Down Stage. Soul singer Raquel Rodriquez will deliver gritty grooves and the Dexter Story All-Star New Year’s Eve Band will electrify the scene with two sets of jazz, funk and fusion.

“Now in its fifth year, Grand Park + The Music Center’s N.Y.E.L.A. is an L.A. tradition that brings out the best in all of us as people from all over the region celebrate together in the heart of the civic center to welcome the new year,” said Rachel Moore, president and CEO of The Music Center. “Grand Park is known as the place where Angelenos come together, embrace the diversity of our county, and this New Year’s Eve will be no exception.”

With access to 60 food trucks, Angelenos will have their pick of food options, including Belly Bombz, The Queso Truck, The Deli Dr., Cousins Maine Lobster, Cocina Fresca by Mangia, India Jones, The Surfer Taco, The Pudding Truck, among others.

County aims to instill a love of reading with new cards

Beverly Hills hotels welcome the Year of the Dog