Astro’s Doughnuts and Fried Chicken are out of this world

The words “FRIED, STUFFED & GLAZED” are emboldened in black letters inside Astro Doughnuts and Fried Chicken on Sixth Street in downtown Los Angeles. Astro celebrated National Crème Brûlée Day last week by serving their crème brûlée filled glazed doughnuts. Wanting to taste one of those delicacies and explore the menu a bit more, I visited the restaurant. The space has a modern interior, with reclaimed wood tables and metal chairs. A large glass case displays the colorful doughnuts including the PB&J – a sweet red berry jam confection with crunchy peanut butter filling – and the maple bacon with maple glaze and cruncy bacon pieces on top. You may find specials like the dark chocolate caramel macchiato or red peach melba filled with fresh peach puree. The blackberry lime tart doughnut and the Boston cream with yellow passion fruit drizzled across chocolate glaze are other delicious selections.  However, I had my eye on the crème brûlée doughnut. Just as it sounds, the filling in the glazed doughnut tastes like the popular dessert – luscious cream with a slightly burnt caramelization on top. 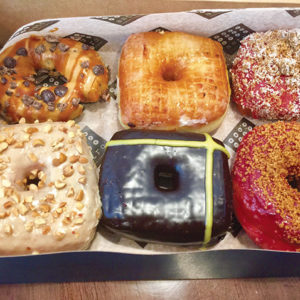 The fried chicken and doughnut concept was brought to Los Angeles by partner Art Levitt. The Harvard Business School graduate happened upon a fried chicken and doughnut shop in Washington, DC with a long line of people waiting to order something “fried, stuffed and glazed.” He reached out to the East Coast owners and co-founders, Jeff Halpern and Elliot Spaisman to expand their operation to the West Coast. With Levitt’s experience and expertise (former President Disney Regional Entertainment; CEO of Fandango and CEO of Hard Rock Café) they agreed to a partnership.

The pressure cooker makes the fried chicken exceptionally moist. Orders come in  two, four or eight pieces served in a box. They also serve chicken fingers with dipping sauce. Fried chicken sandwiches served plain, with hot sauce and honey or with sausage gravy are offered for breakfast. Breakfast biscuits are another option so I tried two versions. One included a fried farm fresh egg and bacon and the other was a cheddar flecked biscuit with honey butter and fried white meat chicken. They also make a French toast doughnut style roll served with butter and pure maple syrup. Breakfast is served until 11 a.m. 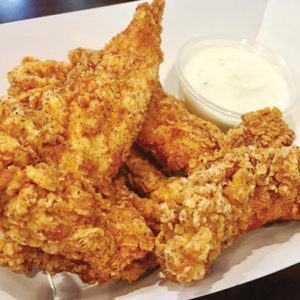 Pressure cooked fried chicken is super moist inside and crunchy outside. (photo courtesy of Astro Doughnuts and
Fried Chicken)

During lunch the sandwiches can be ordered on a savory doughnut, potato roll or Old Bay doughnut. Guests can add blue cheese sauce, Sriracha mayo, Sriracha Buffalo, honey mustard, ranch or barbecue sauce to enhance the flavor of the fried chicken. They also make a fried chicken BLT sandwich on your choice of roll.