The Los Angeles City Council on March 28 will consider the Miracle Mile HPOZ after a subcommittee unanimously supported reinstating almost every property originally proposed in the boundaries on Tuesday. 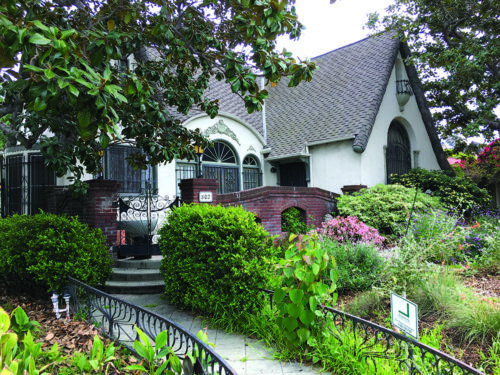 All homes south of Eighth Street in the Miracle Mile will be protected from “overdevelopment” if the HPOZ is approved on Friday.
(photo by Gregory Cornfield)

The HPOZ – historic preservation overlay zone – would grant permanent protections for the neighborhood’s architecture. It will also stand as a major victory for residents in favor of preservation and members of the local neighborhood council, who for years have protested “overdevelopment” and applied to establish regulations to preserve the historic character of the neighborhood.

Spurred by testimony from representatives for Councilman David E. Ryu, 4th District, and Council President Herb J. Wesson, 10th District, members of the Planning, Land Use and Management Committee (PLUM) voted 5-0 on Tuesday in favor of recommending that almost all properties be reinstated. If approved, the decision would reverse the Planning Commission’s recommendation from December to exclude properties along Olympic Boulevard as well as those north of Eighth Street.

“We moved one step closer to preserving the unique, diverse and historic identity of Miracle Mile, while still providing for new housing opportunities along a major transit corridor,” Ryu said in a statement after the PLUM Committee vote. “The establishment of a flexible HPOZ for the area will help to further protect over 1,300 historic properties and guide balanced growth in the neighborhood.”

Citing “overwhelming” support from a survey sent to thousands of residents, representatives from the council offices convinced the PLUM Committee to reverse the recommendation. According to Ryu’s office, more than 4,300 letters were sent requesting neighborhood feedback, and the majority of responses were supportive of the HPOZ with its original boundaries. More than 530 households supported the HPOZ and approximately 153 households opposed it.

Julia Duncan, planning deputy for Ryu, said the recommendation to exclude properties was never brought to the council office’s attention before the Planning Commission voted in December. She added that the city council recently approved other HPOZs that include Olympic Boulevard.

“I don’t see why this HPOZ would be treated any differently,” she said.

Jordan Beroukhim, a deputy for Wesson, added that the area community plan designates that the properties remain medium residential, “not a commercial corridor,” he said.

On Wednesday, Ken Hixon, vice president of the Miracle Mile Residential Association (MMRA), said the group was very happy. He anticipates that the HPOZ will be approved on Friday according to the PLUM Committee recommendation.

“It takes a village to save a village,” Hixon said, referring to the effort and time spent to preserve the neighborhood. He added that the protections will come right on time to protect the community from negative impacts of development spawned by Metro’s expansion.

Proponents and initiators of the HPOZ criticized the Planning Commission’s decision to exclude properties along Olympic and north of Eighth, which include hundreds of rent-controlled units. Leaders of the MMRA launched a campaign to reinstate the properties almost immediately after the commission voted in December.

In addition, a “No on HPOZ” group has been challenging the specifics of the plan in an effort to preserve property owner rights. The group mobilized in late 2016, and initiated further negotiations after the first planning commission hearing. After Ryu’s office met with the “No” group and the MMRA, and worked with the city planning staff to relax the regulations and rewrite them to make them easier to understand, the Planning Commission voted in favor of the HPOZ. However, they agreed to advance the plan after they excluded the properties along Olympic Boulevard and north of Eighth Street from the boundaries.

David Ambroz, president of the Planning Commission, was criticized by members of the MMRA and residents who support the HPOZ for allegedly attempting to fulfill the wishes of Mayor Eric Garcetti – who appointed Ambroz, and subscribes to transit-oriented development as a way to ease impacts of anticipated population increases. The Miracle Mile HPOZ boundaries are just south of Metro’s Purple Line Extension – which would be paid for by taxes that the majority of the county voted in favor of.

Ken Bernstein, principal city planner with the Department of City Planning, explained on Tuesday the commission’s recommendation allowed for additional types of new development. Bernstein said the commissioners felt there were opportunities for potential commercial development along the major corridors to coincide with the county’s investment in transit.

Bernstein added that an HPOZ does not prevent any development. Among other requirements, it adds discretionary reviews and approval by a local board before permits are approved.

After the PLUM vote on Tuesday, Ambroz sent a statement to the Beverly Press and Park Labrea News.

“I’m incredibly proud of the work completed by the [commission] on this item. We sorted through copious amounts of material, and testimony from a large number of people potentially affected by our decision,” he said in the statement. “We then took action, in a way that we believed served the best interest of the neighborhood and the city.

“I am mindful and respectful of the limited role we play in this process. Ultimately, the decision sits with the city council. The area is represented by two committed city council members, and I’m certain they will act in the best interest of the area, and the city.”

Ambroz’s statement continued, “What I saw throughout this process were passionate neighbors that cared deeply about their community; planning staff doing excellent work; and city council members working to inform themselves and the process with the voice of the people.”

The MMRA argued that the commission’s recommendation in December to exclude certain properties was made at the expense of protections for hundreds of rent-controlled properties in the neighborhood. They did so under the notion that outside developers would pounce on those properties and convert them into luxury or market-rate housing and erase neighborhood character. During the past two weeks, the association put the spotlight on a rent-controlled property on Ridgeley Drive. The residents of the building constructed in the 1930s received unofficial eviction notices from a new owner, who recently applied for a demolition permit – fulfilling the MMRA’s narrative.

Under the HPOZ, that property would have additional protections from demolition and redevelopment. However, with the Ellis Act, the owners would have been required to pay residents relocation fees. In order to be eligible for the state’s density bonus law and incentives, the owners would also be required to replace all of the property’s affordable units.

Many residents during public comment at the hearing on Tuesday said the HPOZ was one of the most divisive issues the neighborhood has experienced, and referred to a town hall meeting in February that became so combative that city officials cut remarks short after audience outbursts.

At the meeting on Tuesday, Councilman Jose Huizar – chair of the PLUM Committee – said he couldn’t remember the last time he saw so many comment cards for one item during a committee hearing.

Former councilwoman, and current Miracle Mile resident, Rita Walters said at the hearing on Tuesday she and her neighbors “get the shakes” when city planners talk about “increased development” in the neighborhood, and she supported the full HPOZ boundaries.

Opponents to the HPOZ said the regulations encroach on property rights, and said they’re afraid making alterations to their homes will become more expensive and bureaucratic. Suzanne Perry said she has lived in the Miracle Mile since 1975, and now her daughter and granddaughter live in the neighborhood as well.

“This house is a treasure,” she said, explaining that she’s afraid making alterations or renovations would become too bureaucratic. “We are completely opposed to this HPOZ.”

Proponents of the HPOZ echoed that same admiration for the neighborhood. Mimi Holt, who lives on Meadowbrook Avenue, said her home is her “refuge.”

“My backyard is my oasis and my community, my block, is my support and strength,” she said in favor of the HPOZ.

Stephen Kramer – president of Greater Miracle Mile Chamber of Commerce – has continuously supported the HPOZ from its conception, and its original boundaries.

NOTE: This story was updated on March 24 to reflect the city council postponing the vote until March 28.

[…] comment during a land use committee hearing on March 21 was limited to 30 minutes due to the number of cards submitted. Councilman Jose Huizar – chairman […]