President Donald J. Trump’s discretionary budget proposal signaled a major shift in priorities for the country moving forward, spurring criticism from opponents and from agencies that learned their anticipated funding could soon be cut. 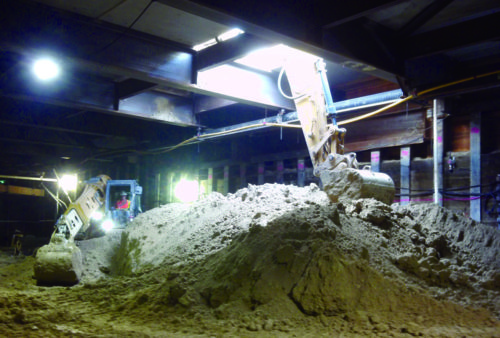 Crews continue work below Wilshire Boulevard on Phase 1 of the Purple Line Extension. The project received major funding from a federal program that Trump proposes to cut.
(courtesy of Metro)

The budget would eliminate funding for the Federal Transit Administration’s Capital Investment Program, called “New Starts,” for transit expansion projects unless a funding agreement is already in place – which would deny funding for Phase 3 of the Purple Line Extension.

The budget will not become law in its current form. Mick Mulvaney, director of the Office of Management and Budget for the White House, emphasized last week that the proposed budget outlines changes Trump would make in the federal government’s discretionary spending programs, and Congress ultimately controls how the country spends money. Aspects of the proposal met quick opposition from California Democrats.

“This is the most draconian budget I’ve ever seen proposed by a president,” said Senator Dianne Feinstein (D-CA). “It’s an absolute travesty for California and every state or community that thought they had a true partner in the federal government. President Trump has betrayed the numerous promises he made to invest in our nation’s communities and infrastructure.”

“A budget isn’t just facts and figures; it’s a statement of values and vision,” Lieu said. “With his disgraceful budget, Donald Trump has sent a clear message to every American: You’re on your own, folks.”

Among the proposed cuts that would affect California, Trump’s budget requests a 13-percent cut to the Department of Transportation – which has been vital to Metro’s expansion in Los Angeles County.

Phase 3 is planned to extend the Purple Line to the Westwood area by 2025. Just over two months ago, the Obama Administration announced $1.2 billion for Phase 2 of the Purple Line Extension from the same New Start program. According to Trump’s proposal, future investments in new transit projects would be funded by the localities that use and benefit from the projects.

“This will eliminate potential jobs and significant public transit progress in Los Angeles,” said Congresswoman Karen Bass (D-CA), who was formerly Speaker of the California Assembly. “It’s important to invest in our cities and to initiate growth; the president’s budget does the opposite and we will do everything that we can to reverse this.”

“A lack of federal funds at current levels would potentially impact Metro’s ability to deliver some projects in the Measure M transportation plan,” Washington said in a statement. “Metro traditionally receives approximately $600 million annually in federal formula funding and has, over the past several years, secured approximately $300 million in federal New Starts funding for our transit projects.”

He added that Metro will continue to advocate for federal support of Phase 3.

Carl Marziali, press secretary for Mayor Eric Garcetti, who is vice chair of the Metro Board, said it would be premature to speculate on changes to federal funding of infrastructure projects. Phase 3 is a critical part of the city’s bid to host the Olympics in 2024, which Trump supports. Marziali said Garcetti expects the final federal budget will respect the nation’s infrastructure needs and priorities.

Trump’s proposal also would eliminate funding for TIGER grants, which have allowed state and local governments to partner directly with the federal government to improve transportation infrastructure.

As a candidate, Trump said he would propose a $1 trillion infrastructure bill in part to fund transportation improvements. However, the specifics of that plan or bill have not been released. Mulvaney said that plan is expected to be released in the summer or early fall, but transit agencies cannot be sure if that money will be spent on public transit projects or more highways and roads.

The budget did, however, maintain the federal highway formula funds, which support new highway construction. But a return to highway investment contradicts Los Angeles’ efforts to lessen traffic, as well as the Measure M half-cent sales tax, which Los Angeles County voters approved by nearly 70 percent in November.

The consequences could mean increased sprawl and more vehicular travel through induced demand. Coupling that with Trump’s largest proposed cut – a 31.4 percent reduction in funding for the Environmental Protection Agency (EPA) – could be a recipe for increased carbon emissions in the country’s most populated state. Trump directed the EPA to hold vehicle fuel economy targets that help curb vehicle pollution. The fuel mileage targets were part of an effort to persuade automakers to develop and market cleaner vehicles. The EPA will decide by mid-2018 to keep the rules or not.

“If Washington continues down this road, California will take the necessary actions to preserve current standards and protect the health of our people and the stability of our climate,” Gov. Jerry Brown wrote to EPA Administrator Scott Pruitt.

“For Trump, the urgent, fierce facts of the global climate crisis are ignored,” Lieu said. “Trump will walk away from the Clean Power Plan, slash programs to develop green technology and eliminate climate change research.”