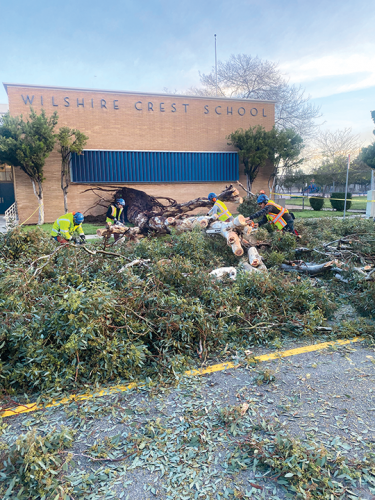 The latest in a series of winter storms arrived in Los Angeles early on Jan. 9, lashing the city with winds up to 60 miles-per-hour and dropping up to six inches of rain that flooded streets, damaged homes and endangered drivers across the region.

After peaking in the evening on Jan. 9, the storm had largely cleared the following afternoon, and forecasters predicted a few days of milder weather followed by another set of storms expected to bring lighter rains from Jan. 14-16, National Weather Service meteorologist Ryan Kittell said.

Although the next storm is not expected to be as powerful, the ground is so saturated that any additional precipitation could prove dangerous, Los Angeles Fire Department spokeswoman Margaret Stewart said. She encouraged Angelenos to visit lafd.org/news for a full list of safety tips ahead of the coming storm.

Beverly Hills Fire Chief Greg Barton also urged residents to take precautions ahead of the next bout of rain.

“I would recommend that residents clear their drains and ensure that if they do have basements, their basement pumps are working,” Greg Barton said.

While the storm necessitated some emergency rescues by the LAFD, caused mudslides and disrupted travel across the city, the damage that Los Angeles suffered was less intense compared to counties to the north, including Ventura and Santa Barbara, where some areas received up to 17 inches of rain, washing out entire stretches of highway, Kittell said.

“L.A. County did get a good amount of rain, but we kind of dodged a bullet,” he said.

Neither the LAFD nor BHFD reported any serious injuries, fatalities or extensive damage to the inside of any structures.

Numerous roads in the Hollywood Hills and other mountainous areas of the city were closed due to mud flows, with debris occasionally piling up in residents’ backyards or against exterior walls, Stewart said.

On Jan. 8, the Los Angeles Department of Transportation closed sections of Mulholland Drive between Laurel Canyon Boulevard and Coldwater Canyon Drive in preparation of the coming storm, and the roads continued to be impacted throughout the beginning of the week.

Sections of Laurel Canyon Boulevard remained closed after the storm cleared on Jan. 10, as workers removed debris from the road, and a section of Beverly Glen Boulevard in Bel Air was closed on Jan. 9 after being covered by mud, according to the LADOT.

Debris continued to accumulate after the storm cleared. City workers had to conduct repairs in Hancock Park in the afternoon on Jan. 10 after residents lost power, and on the morning of Jan. 11, a 70-foot eucalyptus tree in front Wilshire Crest Elementary School fell and blocked Olympic Boulevard.

The rain also trapped drivers, who in some areas had to contend with water that had risen above car tires or came bubbling out of manhole covers.

“We pulled at least a dozen people out of flooded vehicles across parts of the city,” Stewart said. “No one was injured, they were just stuck.”

In Beverly Hills, the majority of calls came in late on Jan. 9 and early on Jan. 10, Barton said. The BHFD responded to approximately 20 flooding calls, most of which came from residents whose drains had clogged or who had water leak into basements, he said.

Barton added that the department responded to 13 fire alarm calls, mostly from commercial buildings, and did not make any car rescues.

By the afternoon of Jan. 12, the region is forecasted to experience weak Santa Ana winds that could raise temperatures into the 70s before the next storm pattern arrives on Jan. 14, Kittell said.

“That could be a brief but welcome respite to a lot of folks,” he added.

The next storm is expected to drop between one and two inches of rain, significantly less than what fell this week, Kittell said. Storm totals varied widely across the city, with LAX receiving approximately 1.69 inches, while the Hollywood reservoir received 5.01 and Woodland Hills received 6.5 inches.

While it is too early to say definitively whether the recent wave of storms has ended the drought that has gripped the state for years, they have certainly helped shore up the state’s supply of water, Kittell said.

“Whether it took us out of the drought or not, that’s going to be determined by a number of folks over the next couple of weeks,” Kittel said. “Just looking at the [Sierra Nevada] snowpack and changes in reservoir levels, I think it’s safe to say it was a significant improvement.”