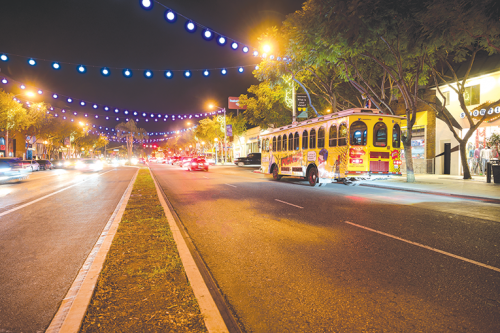 The lanterns above Santa Monica Boulevard will be illuminated in blue in observance of National Slavery and Human Trafficking Prevention Month. (photo courtesy of the city of West Hollywood)

The city of West Hollywood is observing January as National Slavery and Human Trafficking Prevention Month, which raises awareness to prevent and end human trafficking.

Through Friday, Jan. 20, West Hollywood City Hall and the globe lanterns above Santa Monica Boulevard will be lit blue, which is the international color of recognition for human trafficking awareness.

The Department of Homeland Security defines human trafficking as modern-day slavery involving the use of force, fraud or coercion to obtain some type of labor or commercial sex act. Globally, an estimated 25 million people are subjected to human trafficking and forced labor, which is responsible for an estimated $150 billion annually in illicit profits. Victims come from all genders, ages, races, countries and socioeconomic statuses. While human trafficking can happen to anyone, people who are already in vulnerable situations — including migrants and refugees fleeing conflict or disaster, homeless LGBTQ youth, women and girls and children in poverty — are preyed upon and may be more likely to be targeted by traffickers, authorities said. Different forms of human trafficking include sex trafficking, forced labor and domestic servitude, with 80% in forced labor and 20% in sex trafficking. Any person under the age of 18 involved in a commercial sex act is considered a victim of human trafficking.

The Coalition to Abolish Slavery and Trafficking helps people who have been in forced prostitution, forced labor and slave-like conditions by providing legal and social services. For information, call (888)539-2373.

Journey Out provides comprehensive services and support to help victims of commercial sexual exploitation and sex trafficking. For help, call (818)988-4970 or email info@journeyout.org.