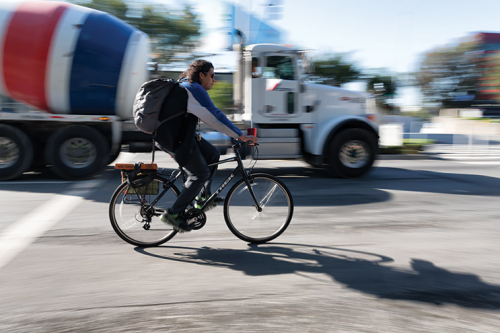 A cyclist participates in West Hollywood’s Bike to Work Day in 2018. (photo by Jon Viscott)

West Hollywood resident Danny Roman owns Bike Shop LA and Bikes and Hikes LA, so when it comes to protected bike lanes, he admits that he has a stake in the ongoing discussions over the future of alternative transportation in the city. Roman sees West Hollywood similar to Amsterdam, a city where he said transportation has been transformed by the accessibility of bikes.

“I just feel like if we build it, they will come,” Roman said.

On Jan. 18, the West Hollywood Transportation Commission considered adding protected bike lanes along Santa Monica Boulevard, not only a main thoroughfare in West Hollywood, but one of the busiest commuter roads in the Los Angeles area. The commission’s recommendations will be considered by the City Council, which recently decided to launch a protected bike lane pilot program along Fountain Avenue.

“If we build a really safe biking lane, people will actually start biking. [Many people] in West Hollywood actually do commute to Century City for work. They’re just sitting one by one in a car in gridlock going all the way across. If they had an electric bike, if they had a protected bike lane, they might opt into just biking across. I make it to Century City on my e-bike in like nine minutes. Driving my car to Century City during traffic takes 40 [minutes],” Roman said.

The plan for Santa Monica Boulevard would shave the median of the street and remove some parking.

“[It] would connect with Beverly Hills’ existing green painted bike lanes on Santa Monica Boulevard, and [would coincide with the] city of Los Angeles’ future plans for the street east of La Brea [Avenue]. They would provide a contiguous, safe path from Doheny to La Brea,” said Michael Schneider, founder of Streets for All, an organization working to improve transportation accessibility and safety throughout the L.A. area.

Santa Monica Boulevard already has bike lanes, but the protected element would be a “very different experience,” Schneider said.

“[It would] attract a much different class of cyclist than unprotected bike lanes. They make it feel much safer, and therefore less experienced cyclists, children, etc. would be more likely to use them. Parked cars and/or bollards would physically protect cyclists from moving car traffic. In parts where protected bike lanes aren’t possible due to width constraints, even unprotected lanes are better than nothing. The lanes would transform West Hollywood, and get a lot of cars off the road, as some people would choose to get around by bike or scooter,” he said.

Schneider said that more bike lanes could be particularly helpful in a compact city like West Hollywood.

“Many residents could do errands, go to meetings … within the city if they felt like they weren’t going to die trying to bike or scoot around,” he said.

According to Roman, there has been pushback within the city about protected bike lanes, in despite council support.

“The city and [senior transportation planner] Bob Cheung who works there is really against putting in protected bike lanes, even though all City Council voted on it. He keeps on coming back with studies saying that there’s not enough room, that we can’t do it. It’s just frustrating because we live in a progressive city,” he said.

While the Fountain Avenue bike lanes will go forward, future bike lane projects could be influenced by the findings of city staff. Cheung did not respond to a request for comment by deadline.

The commission’s recommendation will be made to the full council at a later date, at which time the City Council will determine the future of bike lanes on Santa Monica Boulevard.

Making Fountain narrower for cars will cause more clogging, traffic problems and danger. Changing existing conditions for business and/or resident interests is catering to a much smaller percentage of people than those who actually use SMB & Fountain, in cars…Has anyone noticed how seldom bike lanes are used?