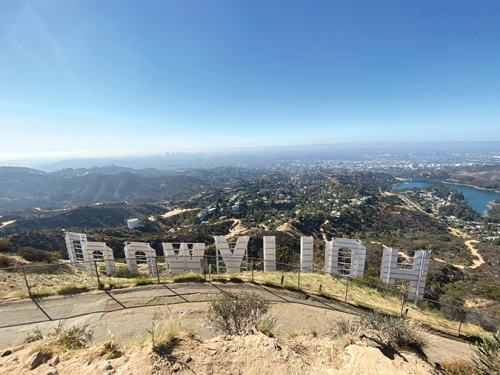 The Hollywood Sign Trust is celebrating the iconic landmark’s 100th anniversary in 2023. (photo by Edwin Folven)

The centennial year of the Hollywood Sign kicked off in grand fashion with an announcement of a new visitors center and museum to be built near the 100-year-old landmark.

The Hollywood Sign Trust is seeking to raise funds for the visitor center and is hoping to form public-private partnerships to make the plan a reality. The announcement came at the beginning of a year of fun and informative events that will be announced soon by the trust.

“People from all over the world have been captivated by the recent transformation of the Hollywood sign, and now with fresh paint and the upcoming 100th anniversary, we are thrilled to move ahead on plans to create a one of a kind visitor center,” said Jeff Zarrinnam, chair of the Hollywood Sign Trust. “Over the years, visitors and locals have expressed great interest in a close-up experience where they can learn more about the roots of the Hollywood sign, its legendary stories and the epic hopes and dreams the sign continues to inspire.”

Zarrinnam said creating a visitor center for the Hollywood sign is a goal outlined in the city’s master plan for tourism, and is something members of the community have inquired about many times over the years. He said the cost, potential location and contents of the visitor center are still to be determined. The trust made the announcement “It’s always been top of mind, but nobody ever took action,” Zarrinnam said. “In 2023, we thought it was time to take that action and get a visitor center in place.”

The sign itself is owned by the city of Los Angeles, and the Hollywood Sign Trust, a nonprofit that operates under the auspices of the Hollywood Chamber of Commerce, is responsible for physically maintaining, repairing and securing the Hollywood sign, as well as capital improvements and education. The chamber owns the licensing rights for the sign’s image. Zarrinnam said the trust is examining the possibility or partnering with a company on branding at the visitor center as a means of raising money for the project.

“It’s typical for these types of public-private partnerships,” Zarrinnam said. “We are also looking for partnerships with local companies and individuals. Every dollar raised will go straight into a special fund to make the visitor center a reality.”

Zarrinnam said the amount of money needed has not been determined because the scope and location of the project has not been finalized. He hopes the visitor center could be located in Griffith Park, which would likely require the City Council or the Recreation and Parks Department to approve a space, and could potentially save on the cost of buying property or renting an existing building. Another possibility is a private property owner donating space for the center, which would alleviate the need for city approvals. If a new building is constructed, it could be required to go through the planning department and the City Council, and would likely cost a lot more, Zarrinnam said. Over the coming weeks, the trust plans to meet with representatives from the city and the business community to consider possibilities and expand upon the initial ideas.

Zarrinnam said he hopes the visitor center will house artifacts connected with the Hollywood sign, including pieces of the old sign that was taken down decades ago during a previous refurbishment project.

“We have a tons of memorabilia and old photographs and documents. Pieces of the sign that were taken down in ’78 are still in a warehouse, and it would be great to have those on display,” he added. “This is the beginning of a process to figure out what people want in a visitor center and what it should include. We are excited to hear people’s ideas.”

Zarrinnam asked that potential sponsors and donors email betsy@hollywoodsign.org, and encouraged the public to visit hollywoodsign.org for information about the sign and the visitor center project.

He added that the anniversary events are still taking shape and will be announced soon.

“Stay tuned,” he said. “We are taking one step at a time and we are using the start of the year to announce this exciting new project.” to start the process of gathering public input, figuring out details and generating revenue for the project.